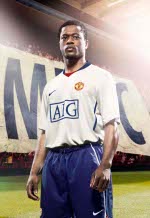 Manchester United will lose defender Patrice Evra for four games after the French international was banned and fined £15,000 by the FA following last season’s post-match bust up at Stamford Bridge.

Evra was involved in a confrontation with a groundsman as he and other United players warmed down after the game against Chelsea.

Meanwhile the FA posted a statement on their web site stating ‘charges that groundsman Sam Bethell had used racially abusive language towards Evra after the match could not be proven’.

A United statement called the ban, which starts on 22 December, “excessive” and hinted they may appeal.

United also posted a stement on their web site which read:

Manchester United note the announcement from the FA and are disappointed with the decision and in particular consider the sanctions against Patrice Evra excessive.

Manchester United and Patrice will consider all options once there has been an opportunity to digest the full reasons for the decision. There will be no further comment.

The two-day hearing in London finished on Friday and was attended by officials from both clubs, with the cases being heard separately by the FA’s regulatory commission.

The Frenchman and Bethell were pictured having a confrontation following the incident, with Bethell raising a fist towards Evra while being held back by two Chelsea staff members.

The FA said Evra had struck Bethell on the side of the head, and that the player admitted to pushing a different groundsman with his chest.

Chelsea were fined £25,000 for failing to ensure an employee conducted himself in an orderly fashion.

Written By
Felipe
More from Felipe
The rush of pre-season football boots continues as adidas reveal their white...
Read More