UEFA will discuss plans regarding a European League which could replace the Champions League and Uefa Cup.

Despite vocally disagreeing with the concept, UEFA president Michel Platini is prepared to work with clubs who are members of the European Club Association (ECA) to get plans for a ‘Super League’ with three divisions off the ground. 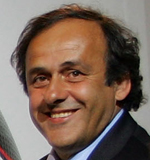 Everybody knows my philosophy about European competitions…but the world is changing and we must be careful about that.

If it was up to me, I would revert to European Cups as they were at the beginning, with just knockout rounds. But we must listen carefully to any suggestion. If (clubs) come and talk to us, we would listen to them and then decide.

A meeting of the ECA, which represents a huge 137 leading teams, was held in Switzerland last week. It is thought that they discussed the possibility of the three-division Super League having around 20 clubs per division, and starting some time after the present Uefa television and marketing deals expire in 2012.