Samuel Eto’o has threatened to leave Barcelona if they have another season in the League like this one. Where to? Abroad to the highest payer! 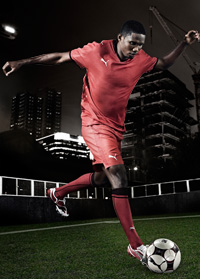 In the most important period of Barcelona’s season, just before they go to war with Manchester United in the Champions League, Samuel Eto’o has warned Barcelona that he would leave the club for silverware.

The weekend was not a good one for Barca, they effectively handed the La Liga crown to bitter rivals Real Madrid, after playing out a goalless draw with Espanyol.

In the aftermath of that game, Eto’o spoke out about his desire to win trophies, even if that means a move away from the Nou Camp.

If we continue like this next year, then I will have to leave and go somewhere else. I have to win trophies.

In Spain my period has finished. I have touched the ceiling with Barcelona, so if I leave I will go abroad. I will go to whoever pays the most.

What has caused this dip in form? I ask myself that question. Football reflects life. Sometimes things happen to you that you cannot explain.

With all the players we have, we draw or lose some games without understanding why. There is no explanation.

In the Champions League, though, we feel well. We’re just three games away from being able to lift the trophy with the big ears.

It’s the game of the season for us. United are favourites, but we must prove we’re better than them. We will not be lacking desire or character.

Right now Iniesta is our best player, we need him to be fit. And if Lionel Messi is on form it will be like having a PlayStation footballer in our team.

Written By
Felipe
More from Felipe
Arsene Wenger has branded his team absolutely amazing, despite finishing the season...
Read More