Samuel Eto’o turned in a man of the match performance for Inter Milan for the Suppercoppa Italiana wearing the new Puma v1.10 SL lightning on Saturday night. 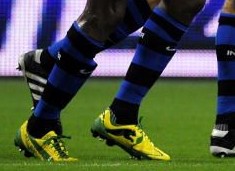 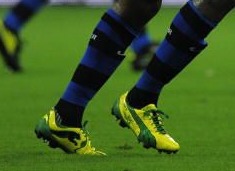 The Cameroon Ace was on fine form for the annual Serie A curtain opener against Roma this weekend, helping himself to a brace in the 3-1 over last season’s league runners-up.

Responsible for the 2nd and 3rd of the Nerazzuri‘s goals, Eto’ certainly used the benefits of the Puma v1.10 SL lightning to deadly effect; his first came from a searing near post run to lose his man and capitalise on some great work from adiPure III-wearing team-mate Diego Milito.

His second was more of a poacher’s goal, taking advantage of some sloppy play from Roma’s defense, Eto’o snapped the ball away from the centre-half’s before finishing a neat one-two with a blistering strike that practically went through Bogdan Lobont at the near-post.

Though the conditions were massively unfavourable at the San Siro on Saturday, with the game drenched by relentless showers for practically the full 90 minutes.

Because of these downpour Eto’o was forced to make an adjustment to the usual'  Puma v1.10 SL lightning, wearing a mixed-stud version of the lightweight football boots.

We’d definitely be interested to know how much weight 6 metal studs adds to the v1.10 SL lightning overall – though we’d imagine it was negligible, as it didn’t seem to slow Eto’o down one bit!