Text BOOTS to 81066 to sign up to the Footy-Boots.com Monthly Text Messaging Service for your chance to win November’s prize of a pair of Errea Prima Top Football Boot! (Terms and conditions apply)

Italian sportswear manufacturer Errea, was founded in 1988 in Parma, Northern Italy. Although Errea is well known in the UK for supplying football kits to the likes of Middlesbrough, Brighton, and Burnley, the sports brand also produces a range of football boots and has an agreement in place for the Middlesbrough FC Academy players to wear Errea football boots. In 2005, Errea Sport was established in the UK to spearhead a major expansion of the brand and begin its foray into the domestic football boot market. 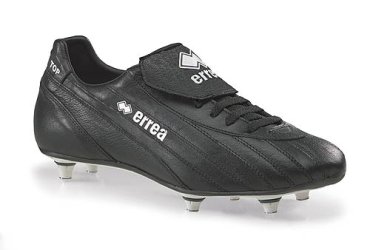 An Androform inner sole is patented with Errea’s Antishock Technology system, with a texon insole. The Prima Top is available in both a six super-light screw-on stud soft ground option and a twelve moulded stud firm ground configuration.

At a retail price of £84.99, the Prima Top is Errea’s leading football boot, and it also caters for a wider foot than that of Errea’s other top end boot, the Super Top. Available up to a size 13, the football boot will also suit footballers with larger feet.

Remember to Text BOOTS to 81066 for your chance to win a pair of Errea Prima Top football boots!

Written By
Felipe
More from Felipe
Andriy Shevchenko scored two and made one assist to fire Chelsea into...
Read More