' We’ve all been there, perhaps more often than we’d like to admit.

Strikers – the ball is whipped in from a corner, there’s an almighty scramble and all of a sudden the ball’s at your feet, you’re off balance and after what can be no longer than half a second a defender’s hoofed the ball off your toes and your tally for the season is one goal lighter.

Keepers – it’s a Sunday morning, it’s freezing and you’ve been stood for 20 minutes with nothing to do, then the opposing striker is through, and he fires a hopeful shot along the ground towards the far post, you commit and for half a second the ball hangs in mid-air as it bobbles off the uneven ground and rolls over the top of your arm.

It’s situations like that where you want to get home and work on improving yourself straight away. You can’t wait for training or the next game to atone for that lapse in concentration.

I had one of these moments and so decided to pick up a couple of Reaction Balls to use at home and see if I could feel any improvement. 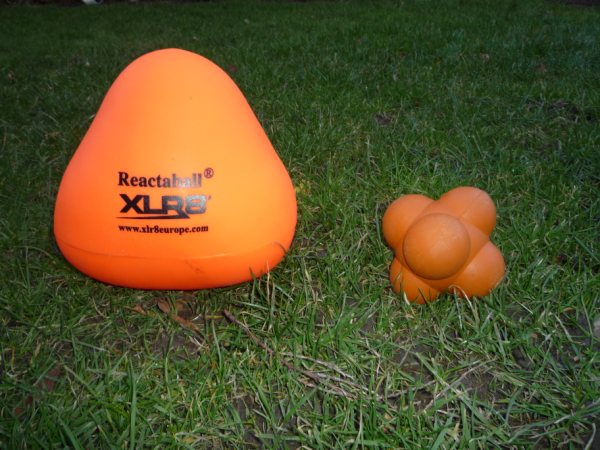 The two balls that I picked up were two completely different shapes; one was roughly the size of a tennis ball which looked like it had 6 ping-pong balls cut in half and stuck to it. As such, when rolled against the floor or thrown against a wall it bounces and bobbles wildly.

The other ball was much larger, and reminded me of the latex bladder you would find inside a standard football. Only rather than the balloon-like inner of a football it has several of the edges squared off, so once again, when rolled or bounced, the ball will move completely erratically.

A very simple concept, but the idea behind it seems solid – as the ball doesn’t move as you would expect, it trains your eyes and hands or feet to concentrate more on the object and react quicker to sudden changes of direction.

The smaller ball is made from a very solid, compact rubber foam – without insulting the manufacturer – it’s similar to something like a dog chew toy! Having used it against concrete, astroturf and grass over a couple of weeks it’s held up very well. When using it solo, I was bouncing it off the floor and onto a wall, so there’s the odd ‘nick’ in the rubber where it landed on a stone, but it’s nothing major.

The larger ball, again, feels very solid. It’s ‘skin’ is very thick and all the corners of the ball are reinforced, which was a smart move by the manufacturers. That said, due to the larger ball having more flat, exposed areas than the smaller one, you will notice scuffs and discolouration more on this ball. I used it for an hour or so on concrete and was a little upset to see the bright orange of the ball had become dull and scratched.
Results

I used the balls in several exercises, some for keepers and others for outfield players, both by myself and in groups. One thing I will say for any coaches or trainers that are reading; drills and exercises with these balls are fun. If you train with younger players, I gave the reaction balls to my brother to try out with his Under-14’s squad and the 2 keepers in the squad took the larger ball to one side and just took it in turns rolling it low to each side, practicing getting low to awkward, bobbly shots or crosses.

Outfield players also found the larger ball to be a good replacement for an actual football, in groups of 4 or 5 passing the ball into feet provided an excellent simulation of an actual ball on a poor pitch; sometimes bouncing up to knee-height, sometimes moving in the air slightly to the left or right and sometimes just rolling along the ground as normal.

Talking to players after spending 20 minutes with the larger ball, the vast majority felt there was a definite benefit to long-term use, both ‘keepers and outfielders. 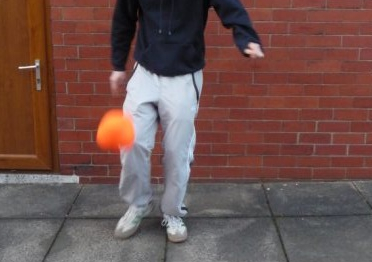 The reaction balls are a simple idea, executed well.'  The smaller ball is a great way to spend a bit of time if no one fancies a kickabout, it’s more durable design than the larger reaction ball means you can take it outside, onto the path or a patch of grass, throw it against a wall and try trap it with your feet or hands.

The larger one works better for training in a group, the increased size and bright colour made it easier to track than the smaller ball, and it doesn’t ricochet as wildly as the smaller ball, so it won’t bounce off and interrupt the flow of the exercise. This is also the ball to use if you’re training on grass, the larger size and hard edges means that it still bobbles and bounces well on a pitch, not as wildly as concrete, but definitely still troublesome enough to be a benefit.

All in all they’re a relatively inexpensive way to sharpen up on your own the night before a match, or in a group in training!