England to Win the Aerial Duels

Andorra will expect to be dominated in the air by England. England have scored three headed goals so far and seven of their goals have come from corners or free kicks. Only six teams have had more headed shots at goal and only three teams have contested more aerial challenges than England to date.

Wales and the Republic of Ireland are two of those three teams, which shows the importance of being strong in the air in the games played in the British Isles. In contrast, only one team has won a lower percentage of their aerial duels than Andorra.

“Castrol research shows that Andorra concentrated their attacking play on England’s right-hand side in September.”

Indeed, against the Three Lions, more than 40% of Andorra’s attacking play came down that flank, perhaps to focus on the relative inexperience of Glen Johnson. This differed from the rest of their games in the 2010 FIFA World Cup Qualifiers, where they have tended to concentrate their attacking play down their opponents’ left side.'  However, Andorra will be confronted with a player in form in the Portsmouth man trying to nullify their attack down the left, should he start ahead of Gary Neville. 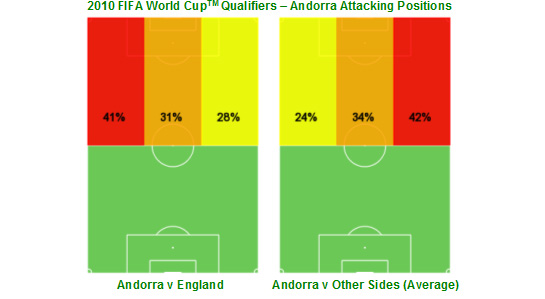 Written By
Felipe
More from Felipe
Celebrity Professional Players on Video – They’ve Got the Bottle, Have You?...
Read More