It’s all change for the England National Team ahead of Euro 2012; with no captain and no manager change is on the horizon for the Three Lions – but not least of all in the form of a brand new England Home Shirt 2012 – 13. 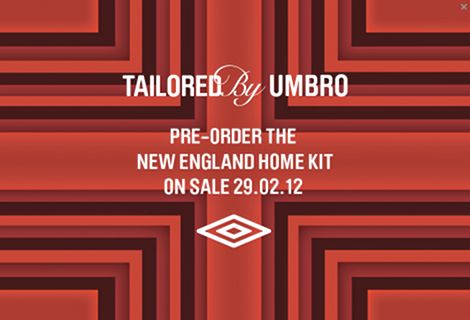 Set to launch on February 29th, Umbro have released a solitary teaser image for the new England Home Shirt 2012 – 13, cryptically showing a stylized cross of St. George in varying shades of red!

After the last two home shirts have been very reserved, could this mean a return to some sort of motif for the latest kit?

Aside from wild speculation, what we do know is that the England Home Shirt 2012 – 13 will be revealed in full on February 29th, as interim manager Stuart Pearce will lead an in-flux England Team against Holland at Wembley.

Available to pre-order now, the new England Home Shirt 2012 – 13 will also be made available to fans on the February 29th and will be worn by the Three Lions as they head to Euro 2012.

What do you think the new kit will be like?

Written By
Ramsay
More from Ramsay
An up-close look at the Prototype boots that have got everyone talking!
Read More