Umbro has cut its 2008 production of England football shirts by two-thirds to one million as the football boot brand’s takeover by Nike gathers speed. 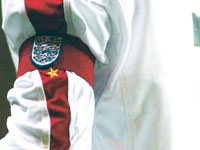 Mr Makin is keen to accelerate Umbro’s overseas expansion into countries such as China to help plug the gap created by England’s failure to qualify for the Euro 2008 championship in Austria and Switzerland. The football boot brand of choice for England captain John Terry expects to generate 80 per cent of its turnover from international markets by 2010, up from the present 60 per cent, and is also targeting new ventures in Italy and Brazil.

Despite this latest setback for Umbro, American sportswear giant Nike moved closer to completing a £285 million takeover by posting its offer document to the British company’s shareholders. Nike requires approval from investors holding 75 per cent of Umbro’s shares, and is expected to complete the takeover by 3 March, 2008.

In the immediate aftermath of Nike’s offer to purchase Umbro, JJB acquired a 10% share in Umbro, whilst Sports Direct doubled its stake to 30%. Analysts believe that the two retailers have taken stakes to protect their negotiating positions with Nike and Umbro, two of their biggest suppliers.

Mr Makin said: “You would have to ask Mike [Ashley] about his intentions, but the level of investment that Nike plans to put into the brand has got to be good for everyone. The product development they can bring to bear and the investment means the product will be more fashionable and technically advanced. That will benefit all stakeholders.”

Written By
Felipe
More from Felipe
Chelsea striker is defended by Hiddink after his confrontation with Champions League...
Read More