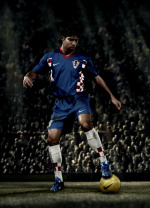 Eduardo has made a return to competitive action for the first time following his horror leg break against Birmingham City last season.

The Croatian international played the first half of an Arsenal reserve team match against Portsmouth at Barnet.

Eduardo was injured when tackled by the Blues Martin Taylor on 23rd February. He suffered a fractured left fibula and dislocated his left ankle.

At the time there were fears that the 25 year old might never play again.

Speaking after his first half performance last night, Eduardo said:

I am feeling very happy to have started my first game in 10 months.

I hope I can do more and that next time will be better. I just felt something in my hamstring but in two weeks I will be all right.

Eduardo, has been undergoing an intensive rehabilitation programme in recent months which has included spells in his native Brazil.

Written By
Felipe
More from Felipe
John Terry is likely to miss the World Cup qualifying match against...
Read More