Talismanic for his country and notoriously clutch for his club, Edin Dzeko has proven his ability to make an impact at just about every level.

But with a World Cup on the horizon for' Bosnia-Herzegovina, a new manager at the Etihad and batch of high-profile signings gunning for Champions League success, we caught up with Edin Dzeko at the adidas Samba pack photoshoot to see how he’s taking the pressure. Which, as it turns out, is very well.

– How’re you finding the new style of Predator in comparison to the others you’ve worn over the years?

It’s definitely better with a lighter boot. You feel better and you really appreciate how good they get over wearing the same model over a few months.

The contact in the ball is always very clean and I know, when I catch the ball properly, exactly where it’s going.

– What’s your thoughts on the colour?

But that’s great, you need something different from time to time and I’m really looking forward to wearing them.

– How’re you finding the new manager?

The way we play now is very different – we want to be an aggressive team, well organised and I think we’ll only improved over the coming.

– Bosnia & Herzogovina are dark horses at the World Cup this year – can you see your team-mates raising their game next summer?

We have a lot of young players in the squad at the moment, and that’s great for us. It means a lot for our players to play in such a huge competition. Whether some of them can be the stars of the event, why not?

– What player have you seen at previous World Cups and always wanted to model your game after?

My favourite player was always Andriy Shevchenko, not just his movement but his positioning in the box was always something I try to bring to my game. 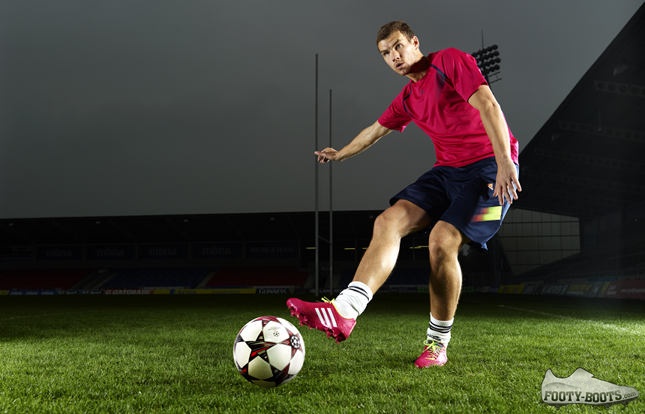 – Manchester City have a squad of International stars – who would you look forward to playing against in the World Cup?

– You obviously have a great relationship with Alvaro!

Yes! He, Jovetic, Navas and Fernandinho have put a lot of quality into our team.

– Have you enjoyed playing up front with Negredo?

Yes, I think we just played the one full game together in pre-season and we understand each other. It’s good to play with great players in your side, and he’s definitely one of us.

– Are there any teams you’d be wary of facing in the World Cup?

Yeah, Spain for me. They’re probably the best team in the World and it wouldn’t be a bad thing to avoid them!

– Everyone here is looking forward to a Brazilian World Cup – what’s so exciting about playing in that country to so many players?

Brazil is a country of football, everyone knows that. But now it’s a World Cup, then that’s on another level and everyone involved is very much looking forward to it.

– Have you managed to check out the new ball yet, the Brazuca?

Yeah, I just saw the ball! It looks good, the colour is similar to the Brazilian colours of the boots which is pretty good!

– Are there any technical aspects of the ball that affect the way you strike it?

Yeah, I think better balls you can really catch hold of – you hit them harder and you’re more confident in the strike. I think adidas balls are the best balls in that sense; you can hit them properly.

– How have Manchester City adapted in the Champions League?

I think the last few seasons in the Champions League maybe we didn’t play how we particularly wanted to play. Now we’ve played two seasons in there, we’re maybe playing like we should be there.