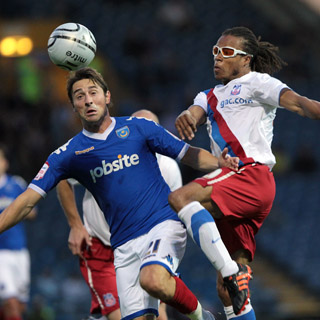 It was a pretty big shock when we heard last week that the former Ajax, Juventus, Barcelona, Inter Milan and AC Milan man (what a r'©sum'© that is, by the way!) would be signing for Crystal Palace, but for us oldies that remember Davids in his younger years, the real surprise is what was on his feet!

In his prime, Davids was a huge name on Nike’s books, wearing the Tiempo and Mercurial ranges of football boots in his illustrious career.

Thanks to his trademark glasses and dreadlocks, Davids was one of the most recognisable players on the planet and starred in some of Nike’s best ads in the 90’s and early 00’s – including cult favourites ‘The Cage’, ‘Good vs Evil’ and ‘Soccer vs Ninjas’.

So, imagine our surprise when Davids turned out yesterday in the new Black/Warning adidas adiPure III‘s!

We can only guess that ‘The Pitbull’ was quite taken by the new colourway as the Black and Orange combo on these football boots definitely brings a bit of ‘Dutch Magic’ to the Crystal Palace strip!