Whilst Nike’s attention has been fixed on the world’s major leagues this weekend, they haven’t forgotten that Africa’s biggest footballing event is well underway in South Africa, and have something special lined up for loyal wearer Didier Drogba. 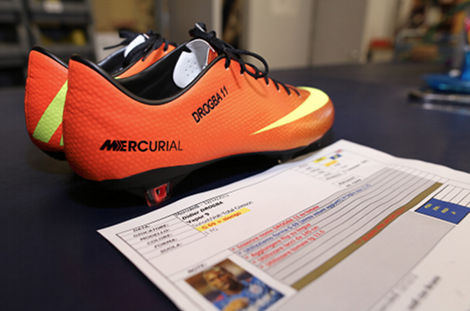 To mark the launch of the new Nike Mercurial Vapor IX, the Swoosh have divided the Mercurial ‘stable’ of players in two: Vapor veterans like Cristiano Ronaldo, Zlatan Ibrahimovic and Aaron Lennon are wearing the Fireberry colourway, whilst young stars like Neymar, Gotze and El Sharraway are in the Sunset.

However, Nike are making an exception in the case of long-time Mercurial maestro Didier Drogba, who will give the Sunset Vapor IX their official African debut when Ivory Coast take on Togo this afternoon.

Drogba will be the only player in the tournament to wear the colourway, honouring what may be his last Africa Cup of Nations at the ‘sunset’ of a staggeringly storied career.

“For a striker, speed is essential. How fast you run, how fast you are with the ball, how quick you are making decisions – everything has to be quick. It all comes down to speed. I’ve been wearing the Mercurial for years and you can see and feel the evolution. With the new Mercurial Vapor IX you get better grip on the grass and can change direction very quickly,” Drogba said. “For example, that last minute of last year’s game -that equalizer goal- was a question of timing, speed and agility.”

The Sunset Vapor IX will be a great match for the Ivory Coast’s kit – and here’s hoping that they prove to be a winning combination for the powerful striker.

If you want an insight into how ‘The Drog’ chooses and looks after his boots, you can catch our exclusive interview with the former Chelsea star, here.

Written By
Kyle Elliot
More from Kyle Elliot
When it comes to boot releases this year, the adidas F50 adiZero...
Read More