Didier Drogba has spoken out for the first time about Luiz Felipe Scolari’s unsuccessful reign as Chelsea manager. The Brazilian was sacked recently after a poor run of results and Drogba has admitted that his methods were often ‘bad’ for the team’s cause. 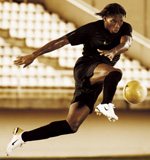 The striker has admitted that he didn’t always agree with Scolari’s views on team selection and reasons for the below par performances. More specifically, Drogba was critical of the fact that Scolari ‘started blaming individuals’.

The Ivory Coast man went on to say that to blame one player out of a squad of 24 for the bad form of the team was, quite simply, ‘wrong’.

Drogba was dropped from the side by Scolari after the teams 3-0 defeat to Manchester United in January and since then, he has felt the blame directed towards him for Chelsea’s lack of progress in the Premier League.

Despite Ray Wilkins claims that all was well in the Chelsea camp under Scolari, Drogba went on to hint they morale was affected by the manager’s outspoken interviews where he criticised certain players.

The former Marseille forward says that he was made a ‘scapegoat’ at times and that Scolari chose to ‘make an example’ out of him. Overall, it seems fair to say that Drogba didn’t enjoy his time under the one time Portugal coach.

Perhaps now that Guus Hiddink is in charge, Drogba can start reminding Chelsea fans about how important a player he is for the team. It remains to be seen whether the Russia coach opts to start him, but you get the feeling that he will be more heavily involved under the new regime.

As for his Chelsea future, Drogba has reiterated his desire to stay at the club. He says that he wants to stay until the end of his contract because of his ‘love’ for the fans.

Drogba finished by saying that he expecting ‘good things’ to come in the remainder of the season under Hiddink. The football odds no longer expect the team to win the Premier League, but there is still plenty up for grabs.

For now though, he will be concentrating on forcing his way into the team and starting to enjoy his football again. Once this happened, a football bet on him scoring plenty of goals in the remainder of the season, may well be a wise move.

Written By
Felipe
More from Felipe
Jeff Winter was Ă˘â‚¬Ĺ›amazed that Sunderlands winner against Liverpool on Saturday Ă˘â‚¬Ĺ›...
Read More