Chelsea striker Didier Drogba was October’s most effective performer across Europe’s five major leagues, according to the Castrol Index..

After studying every minute of every match in the top five European leagues and the Champions League in October 2009, Castrol Performance Analysts have decided that Didier Drogba’s performances have been head and shoulders above the rest.' ' ' ' ' ' ' ' ' ' ' ' ' ' ' '  How does the Castrol Index work?

With the Chelsea forward returning to Champions League action following his three-game European suspension, he can now continue to close the gap on the top 20 in the Castrol Rankings.

Liverpool’s Fernando Torres (8th) remains the top ranked Premier League player, followed by United’s Nemanja Vidic (12th), but Drobga is on course to close the gap if he maintains his current form.

Chelsea’s superiority in the Premier League in October is reflected in the fact that the Stamford Bridge club boast nine players in the top 100 of the Castrol Rankings, more than any other Premier League club and only beaten by Barcelona who have 12.

Thierry Henry and Barcelona retained their dominance at the top of the October 2009 Castrol Rankings, but the leading group will be casting a nervous glance over their shoulders at the sight of Didier Drogba moving up through the field. 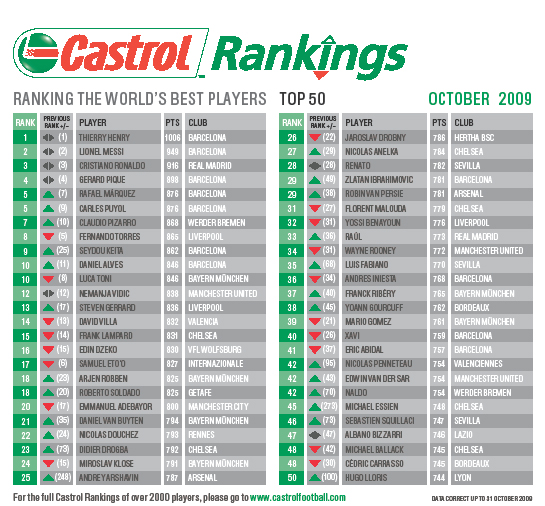 Chelsea striker Drogba had an outstanding October during which he produced a series of performances that marked him out as the month’s most effective performer across Europe’s five major leagues and moved the Ivory Coast star up 50 places in the Castrol Rankings to 23rd place.

The best of games for Drogba was in the 4-0 win at Bolton which showcased the player’s ability both to score goals and create chances for others and was the highest scoring performance of the month. With the Blues forward returning to Champions League action following his three-game European suspension, he could continue to close the gap on the the top 20 of the Castrol Rankings.

Do you agree that Drogba was Europe’s best performing player in October? Let us know below in the comments….