In order to tell this story properly, we’ll have to fill you in on a bit of back-story… 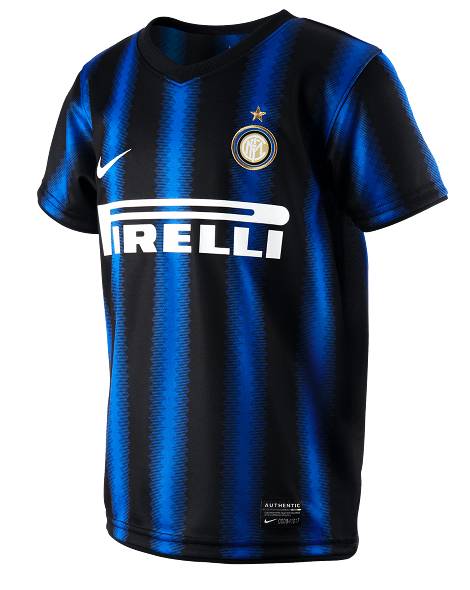 Due to the large amount of counterfeit football shirts and football memorabilia that is available around stadiums on a match day, Nike have introduced a new scheme with Inter Milan to attempt to reduce the amount of knock-off shirts being sold.

Nike have begun producing a special variety of the Inter Milan home shirt that they themselves sell exclusively in Italy on matchdays which differ from the top-spec Inter Milan shirts in a number of ways – the most important being cost!

The idea being that people who would normally buy a ‘fake’ shirt from someone outside the grounds now have the choice to spend a similar amount of money on an official Nike & Inter Milan product.

So, baring in mind that these are sold only in Italy, imagine Nike’s surprise when they found out that a sports shop in Scotland had begun selling them!

The Glasgow branch of Sports Direct (Yep – the one owned by Newcastle United supremo Mike Ashley) was found to be selling these ‘low-quality’ versions of the Inter Milan home shirt for £5 less than what other sports stores were charging for the real deal.

Because of the large number of counterfeit jerseys on sale around the grounds in Italy, we produce a lower price-point replica that doesn’t have the same technical specifications as the ones the players wear for clubs we sponsor there.

“It appears a quantity of these Inter Milan replicas has found its way to Sports Direct. We shall be looking internally at how this happened.

“We want to make it clear there is no question of Sports Direct selling counterfeit products.

In order to help you spot a dodgy strip, the two versions have a number of differences:

They lack the blending pattern between the black and blue stripes and are smoother to the touch.

The proper tops are made from recycled plastic bottles; the material is coarser than classic football kit material, whereas the Italian version is smooth polyester.

The labelling inside the shirts differs between the UK and Italian versions – the size, wash instructions etc on the proper versions are a transfer, whereas the other variety have a sewn-on label.

Another difference between the tops lies in Nike’s placing of the club nickname, on the inside of the strip, behind the badge.

Both top-spec “Nerazzurri” meaning “black and blues”. The Sports Direct tops do not.

Nike have now recalled the strips which have turned up in Sports Direct, meaning if you think you’ve purchased a dodgy top, you can get your money back.

Have you bought a suspect jersey? Let us know in the comments, or Tweet us a picture @Footy_Boots!

Written By
Kyle Elliot
More from Kyle Elliot
Umbro kit out the Champions with an all-new kit for use at...
Read More