Italian striking legend Francesco Totti is currently plying his trade in a brand new pair of football boots, the LX K-Pro by Diadora.

Indeed, the 31 year old got on the score sheet in his first game wearing the new footwear, AS Roma’s 4 – nil trouncing of Parma last weekend.

The LX K-Pro has been specially created for the Italian international , who is described by the company as their very own ‘modern day gladiator’. Additionally the new football boot signifies and celebrates Diadora’s 60th anniversary (LX is 60 in Roman numerals).

Totti’s black and gold football boots have been personally customised as well with an embroided number 10 on the tongue plus the name of his two children Cristian and Chanel. 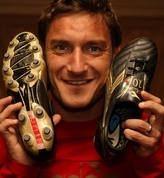 As for the technical specs, they weigh just 9.5 ounces and have a kangaroo leather upper with the seams designed to maintain perfect ball control. Being kangaroo leather, control of the bouncing ball should be a doddle too.

The heel area is constructed with a special ergonomic Morpho cup, made of pre-printed TPU, which guarantees the greatest adaptability to any foot. The outsole is the new MG 14 stud system, which gives maximum comfort on both natural terrain and new generation synthetic fields.

In addition, the LX K-Pro has Diadora’s Axeler Technology, designed to increase performance, ensure progressive flex and elastic action, as well as increase acceleration and reaction time while sprinting or running.