If we had to peg one ‘Brand to Watch’ for 2013, it would have to be Diadora. The Italian brand have been making consistently good boots that don’t seem to have grabbed attention for the last few years, but this year could change that – and they’re kicking it off with the Diadora Evoluzione K – Silver / Match Winner. 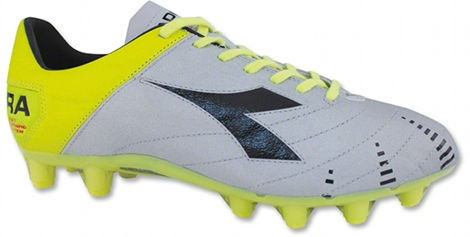 Whilst it would be unfair to describe the brand as ‘sleeping giants’, Diadora definitely aren’t as high-profile as they were in the late 90’s and early 2000’s.

Having seen most of their leading ambassadors retire – barring Antonio Cassano – the on-pitch exposure for Diadora’s boots has been dwindling, despite a consistently-high level of quality footwear being launched.

However, having been privy to a few of the prototypes of Diadora’s upcoming range, there’s plenty of weird and wonderful new technology that we’re sure will stir up interest in the brand again.

And whilst it’s not packing anything new, the Diadora Evoluzione K – Silver / Match Winner is definitely a strong way to kick off 2013 for the Italians.

The classic low-profile silhouette of the Diadora Evoluzione K – Silver / Match Winner is a throw-back to simpler days for football boots, but that’s not to say these are throwback boots.

Wrapping the forefoot and midfoot in supple K-Leather, the Evoluzione is the sort of boot that moulds to your feet over time, getting better with wear, whilst the reenforced collar and heel ensure comfort and a natural fit. 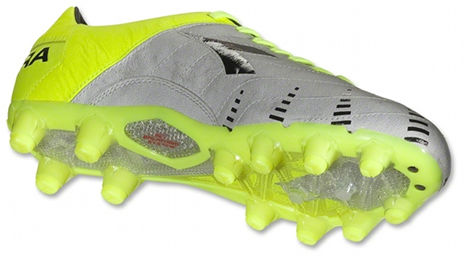 Under the chassis, the top-of-the-range model – the GX 14 Pro – will feature the Geox NET breathing system. Designed to keep feet cool and comfortable by letting sweat out without letting dirt in, we wouldn’t be surprised to see Cassano return to these boots whilst representing Italy in the Brazilian heat at the Confederations Cup this summer.

A unique thread also runs from the toes to the midfoot – called Axler technology, this alloy ensures proper forefoot stability, improving propulsion when running on your toes and reducing energy loss when striking.

Weighing in at 272g, the Diadora Evoluzione K – Silver / Match Winner is available to pre-order now from the US Footy-Boots store for a release later this month at a reasonably wallet-friendly $159.99.

Like this latest colourway from Diadora? Let us know in the comments!

DIADORA EVOLUZIONE K – SILVER / MATCH WINNER, 8.8 out of 10 based on 13 ratings https://www.footy-boots.com/wp-content/uploads/2013/01/diadora-evoluzione-k-pro-silver-match-winner-featured.jpg