Diadora might not have always been one of the top-tier names in football boots, but they’re certainly giving a lot of people a good reason to give them a second look this season, especially with top colourways like this White / Flame Orange version for the DD-Eleven GX 14.

Sure, they’ve had a misstep here and there, but Diadora’s recent releases have been easy on the eye and packed full of features; it’s no wonder plenty are tipping them for a big year in 2014. 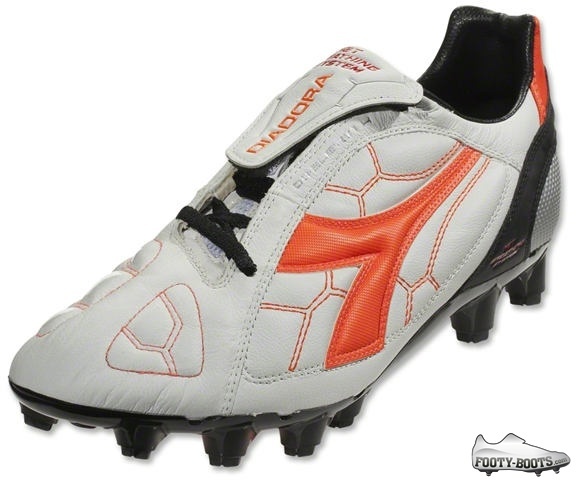 Diadora’s DD-Eleven GX 14, for instance, is one of the best-designed compromises between classic touch and modern tech on the market today.

The Upper is the sort of super-soft K-Leather that you’d expect from the Italian brand, worked in with control zones across the boot and side-offest lacing for improved contact on the ball.

The soleplate hides a Bi-density Axeler system for better forefoot propulsion and stability, as well creating a stronger ‘spine’ through the midfoot for improved energy return.

A combination of synthetic fibres and waterproof membranes allow the DD-Eleven to allow heat and moisture to escape whilst keeping out mud, water and debris.

The DD-Eleven GX 14 in White / Flame Orange hit stores this week – what do you think to this release?