Welcome to the next instalment of the Footy Boots Designer Series!

Last week we brought you a one-on-one with the man who’d was the driving force behind releasing the Concave Sports concept. (Concave CEO Interview)

This week we’re meeting someone else with a great idea, but at the other end of the development scale: 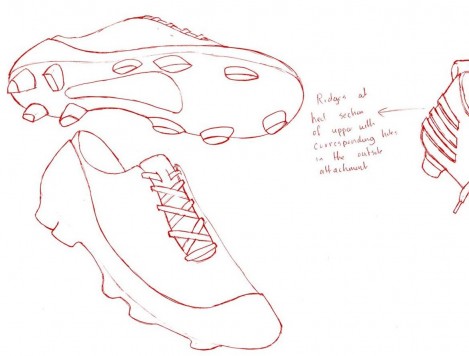 Getting to know you a bit first, who are you and what do you do?

My name is Kevin Coyle and I˘€žËm in my final year studying Product Design Engineering at the University of Glasgow/Glasgow School of Art.

My studies are split across the two institutions with Glasgow University covering the engineering aspects of the course and the art school covering the product design. 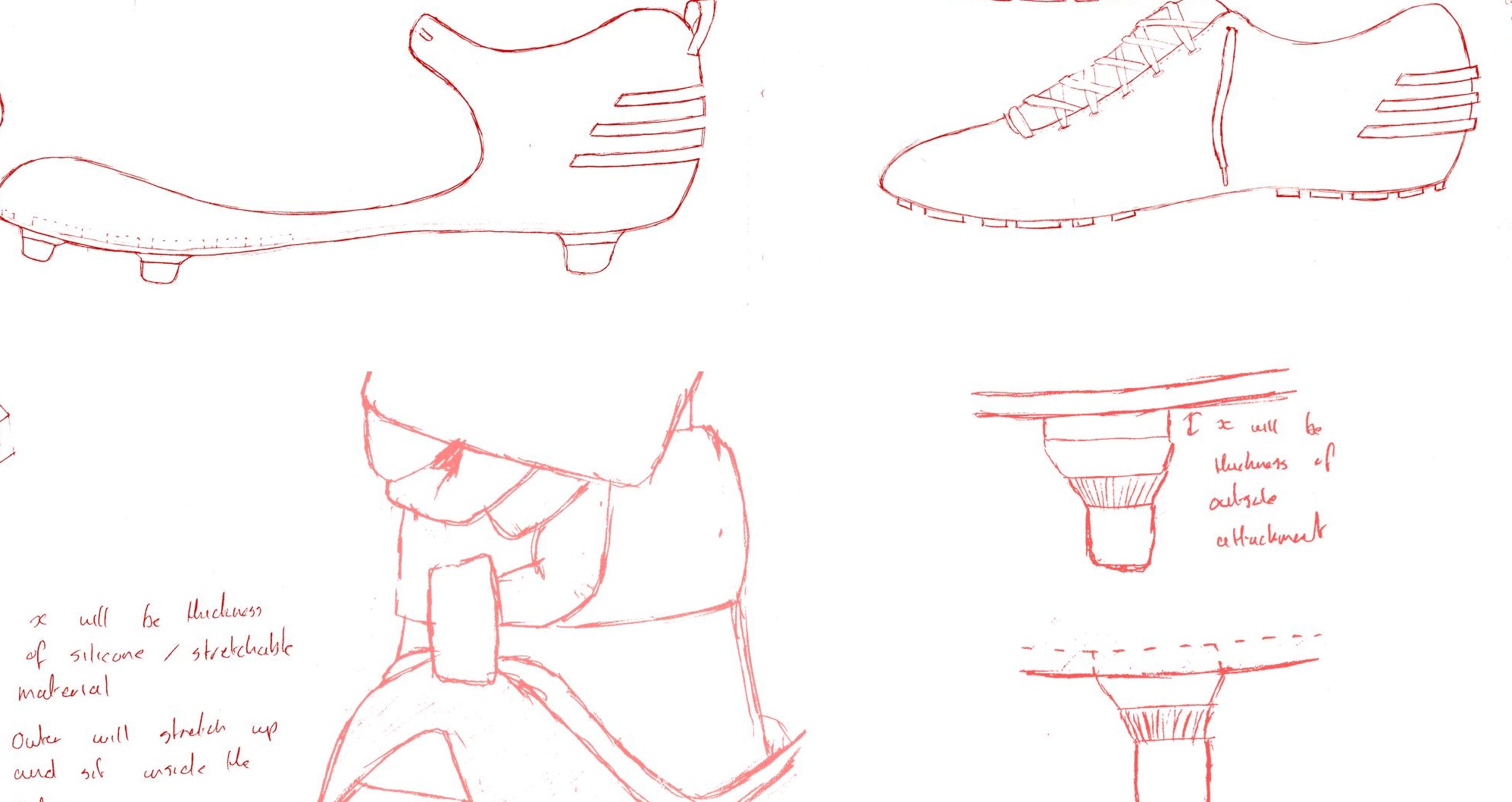 So, you must have a love of football boots to design them of your own free will?

I˘€žËve always loved football and, as a result, football boots. As a kid I always had to have the best football boots (none of those cheap versions) and I˘€žËm still like that today.

In my final year of university I was given free reign to design almost anything I wanted so I instinctively opted to design something football-related.

The final year is pretty intense and it˘ important to design something that you˘€žËre passionate about.

Tell us about the boot you’ve designed here;

The boots consist of an upper part and an interchangeable outsole.

This means that a player only has to own one pair of boots with different soles to play on all surfaces as opposed to the several they would need to own currently.

With this boot they will save money by only having to purchase one boot upper and then purchasing whatever other outsoles they require depending on the surfaces they frequently play on.

The boots are primarily aimed at amateur footballers and children and designed specifically for these users. The benefits of these boots are going to be of very little consequence to professionals who will, more than likely, have any football boots/trainers they need supplied for them.

Ideally I would like to be as many variations of sole available as possible (FG, SG, AG, astro turf trainers, indoor trainers etc) in a wide range of colours so a player could also vary the boot˘ aesthetic. 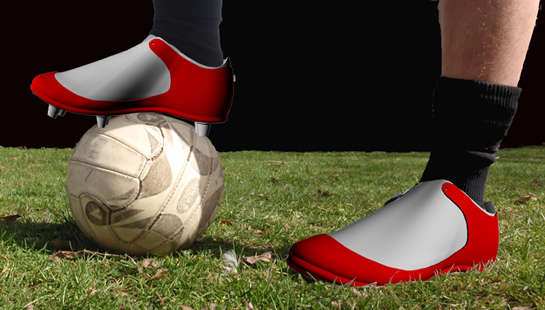 And how does the design work?

The user puts on the upper and then stretches the outsole attachment over it. The attachment is then fixed at the heel to prevent it from slipping back down. This is the design as it currently stands although it is likely to be modified or refined as the project progresses.

What was your inspiration behind this design?

I went through several different designs before I got to this one. During the initial concept generation I had to consider all possible ways of attaching the outsole to the upper

This got me to the point where I realized that one of the two parts would have to be flexible to allow for easy attachment/detachment and the other would have to be rigid in order to give the boot stability.

One of my main user requirements was that the outsole could be attached/detached while the boots were still being worn. This meant that I opted to use a traditional upper instead of trying to design a new one that was highly flexible.

I also took inspiration from a pair of Nike tennis shoes with interchangeable outsoles. 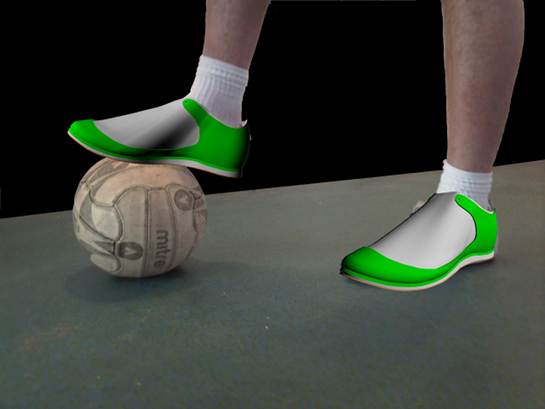 Many have tried to offer innovation in this department (Nike’s new NikeSENSE stud, adidas’ Tunit system) to mixed reception, what do you think sets your idea apart from theirs?

The main advantage is that my boots can also be adapted into trainers. A lot of amateur footballers will regularly play 5s, either indoors or out, which obviously requires at least one pair of football trainers which is a need neither of the above examples address. Also the variable aesthetic is something that is currently unique to my football boots.

In terms of what is currently on the market, the Tunit system is probably the direct competitor to my design. I bought a pair of f50.9s when they were released and personally found them very uncomfortable. As part of my research into parallel products, I asked a friend to change a set of the Tunit studs and it took them several minutes and two of them wouldn˘€žËt screw in properly due to the fact that the soleplate didn˘€žËt line up exactly with the holes in the upper. I feel my design is much more user-friendly and could hopefully be changed from one sole to another in seconds not minutes.

The Nike SENSE stud is currently only available on the new Vapor Superfly boots which, at £275, are well out of the average amateur player˘ price range. From what I have read it is an impressive innovation but not currently one that is going to benefit a large number of footballers outside the professional game.

The main section of the boot looks very classic, was it easier to work your idea around this sort of design, rather than some of the futuristic styles of boots that you see nowadays?

The main aim of my project was to design the interchangeable outsole and therefore I decided to keep the upper as simple as possible. The most important quality that the upper must posses is durability in order to increase the product˘ lifespan.

The uppers are the only part of the boots that are always used and therefore will be the first to show signs of wear and tear. I˘€žËm hoping that by having the toe covered this will also help the upper˘ lifespan as this is the area most prone to damage.

If I was to design it for market I would maybe look into synthetic materials or a more futuristic design but for an academic project I feel I need to concentrate on the boot˘ main feature in order to avoid spreading myself too thinly. 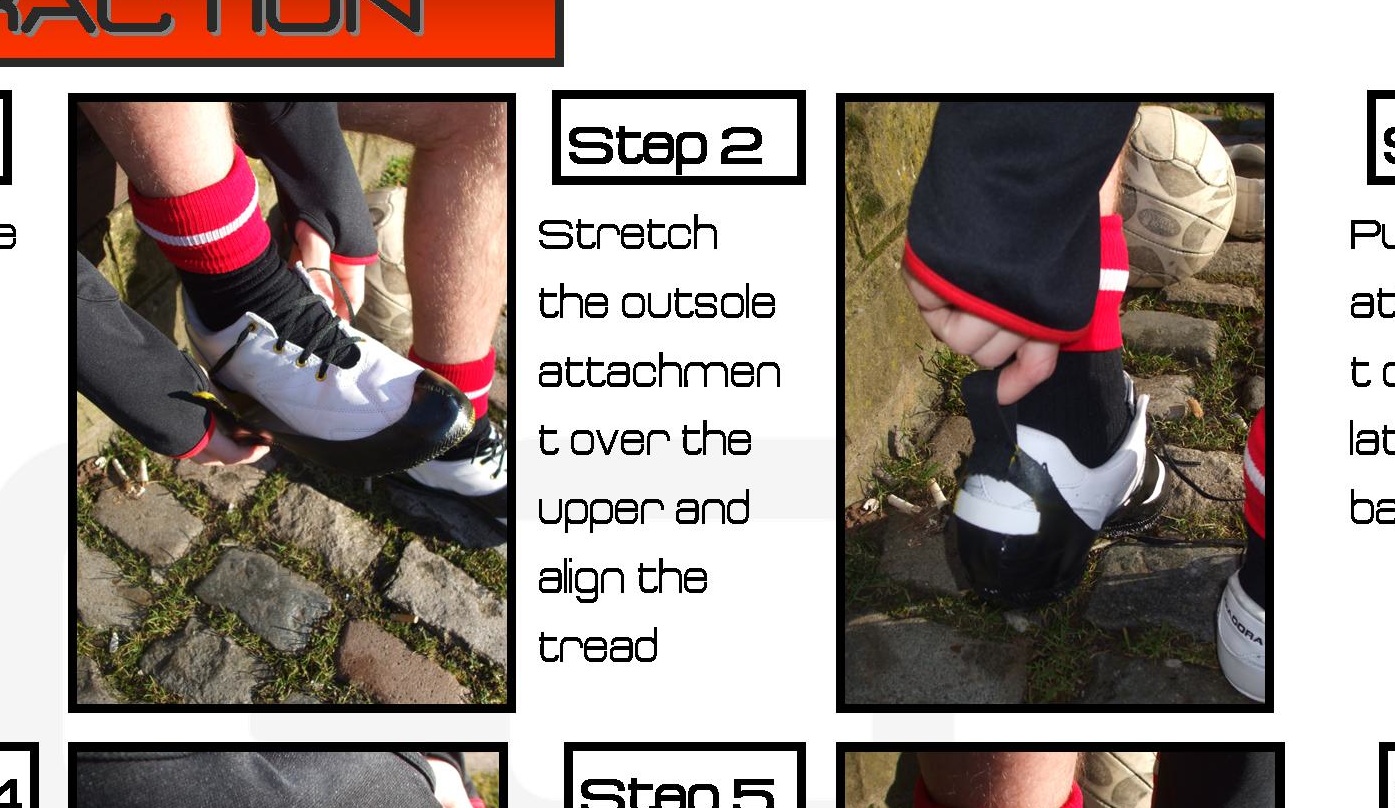 Talk us through the creation of the prototype – how do go about building a boot?

After drawing up some initial ideas I started working with very basic materials (cardboard for example) to test whether or not the concept is valid.

After choosing my concept I moved into using slightly better materials and existing parts to create an aesthetic model with basic functionality.

After receiving positive feedback on that I began to create a CAD model of the boots, which has very recently been completed, in order to have parts made.

So now you’ve got a prototype, what next for design?

To be honest, the prototype shown is an aesthetic model which fell apart during physical testing. This was due to the materials/adhesives used in the soleplate not being able to withstand the running and turning involved during play.

The design process is an iterative one and the important thing is to learn from every prototype and implement what you˘€žËve learned to improve the next one.

Now that I have finished my CAD model I am in the process of having the parts 3d printed which will hopefully give me a functioning prototype. This prototype will again be subjected to physical testing and the design once again refined.

I recently read that Nike went through 43 different versions of the upper for their new Mercurial Vapor Superfly II and that it took nearly 3 years to get from concept to reality (and that˘ with the finances and resources available to the Nike design team). This goes to show just how much time and effort goes into designing a pair of football boots and the importance of product testing. 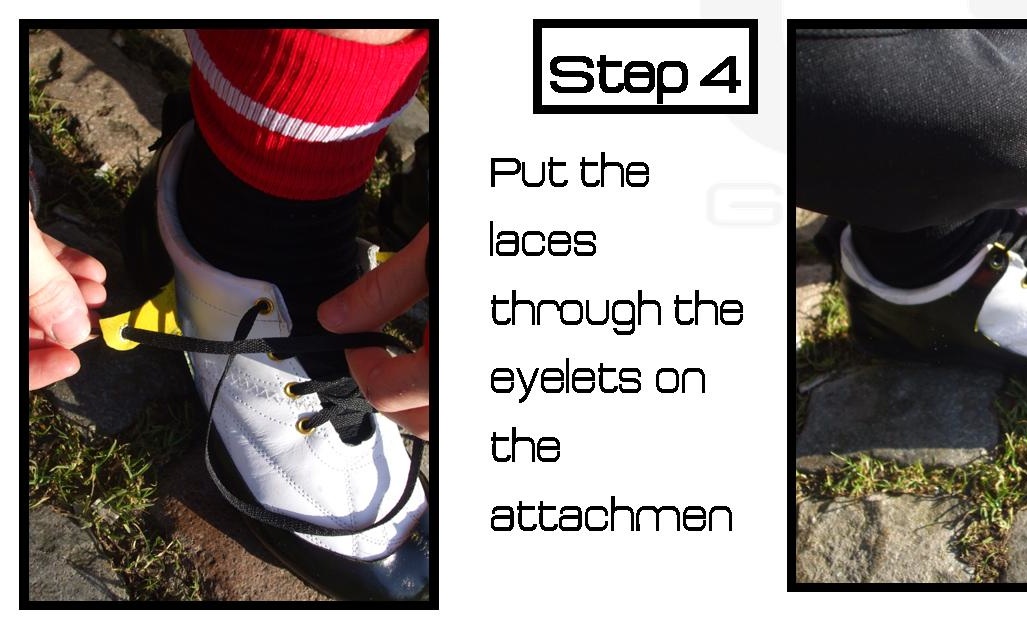 Finally – the two most important questions: Who’s your team and what’s your favourite boots?

I˘€žËm a Celtic fan (one of those that still shows up to home games). It˘ been a season to forget (although I doubt that will ever happen) but, as ever, there˘ always next season.

My favourite boots of all time have to be the Nike Mercurial R9 that the Real Ronaldo wore at the 98 World Cup. I had them in black when I was a kid and I absolutely loved them but I prefer the silver/blue/yellow colourway that he wore in the finals.

However, in terms of a design classic, you can˘€žËt beat the Adidas Copa Mundials/World Cups. They haven˘€žËt changed in over 30 years and still look as good today as they did when they were released in 1979. There is no greater achievement in design than creating something timeless and Adidas certainly did that.

And that wraps up this week’s feature, we’d like to thank Kevin for taking the time to talk to us this week and to the PDE Design Show who featured his work!

What do you think of Kevin’s idea? Let us know!

Written By
Felipe
More from Felipe
Much to the annoyance of media referee’s, Andy Kay goes in with...
Read More