Barcelona’s Spanish hit-man David Villa looks set for a lengthy layoff as he fractured his left leg in the Catalan club’s 3-0 win over Al Sadd in the FIFA Club World Cup. 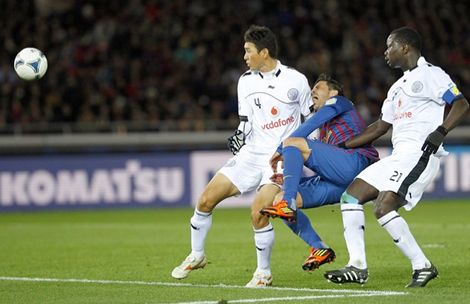 The record-breaking Spanish striker was stretchered off late in the first half at the Club World Cup in Japan with a fractured tibia that could see him miss the remainder of the season.

Perhaps more worryingly for Spanish fans is the concern that Villa could now miss – or at least not be match-for for –  the Euro 2012 competition in the summer – should Villa require the full 6-months to recover, La Roja will likely be left to defend their European Championship crown without their all-time highest scorer.

Barcelona Coach Pep Guardiola admitted in his post-match press conference that Villa’s fractured tibia was a potential 4-5 month lay off, but the former Valencia forward is currently undergoing testing.

Slow-motion replays show Villa landing awkwardly after vying with two Al Sadd defenders, catching his football boot in the turf before his own body weight seems to do most of the damage.

Well keep you posted on his injury as we receive further news.