Hi all and welcome to my new column.

As this is my first post and many people may not have heard of me, I think it’s right that I let you know a bit about myself!

My name is David Hunt, I’m 27yrs old and I play football for Brentford FC in Coca Cola League 1. In my column, I’m going to give you an insight into a professional footballers life.

First off, football is my life. I love going to training everyday and I appreciate how lucky I am to have this opportunity to play the game I love and get paid for it!

My upbringing was fairly normal and from the age of 6 you would very rarely find me without a football. I wasn’t one of those kids that wanted to be a professional footballer from a young age, football for me was purely for fun. 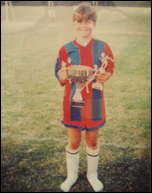 At school I played for my age group and the year above. I was scouted to play for Crystal Palace at the age of 8 whilst playing for Amersham Town in a Sunday League, scoring 5 goals that day. Every year at Crystal Palace the number of players who were kept on would become less and less and I’d wait anxiously once a year for a letter to come through the post to say that I was either being released, or kept on.

Fortunately, I had the luck to progress through this worrying, nail biting process until I was 15, seeing many of my friends come and go. I was then offered a 3 year academy contract and moved to Croydon where I lived for 5 years.

This is when I learnt my trade. I had all sorts of responsibilities including cleaning toilets or being a boot boy for the likes of Hayden Mullins (now Portsmouth) and Clinton Morrison (now Coventry City). I worked hard enough to get offered a professional contract and made my full league debut for Crystal Palace Vs Sheffield United when I was 20 years old. At the time you get that feeling that you’ve made it, but looking back now I still had so much to learn.

I signed for Leyton Orient in 2003 where I had my first full season of week in, week out games.

It’s very daunting the first time you move to a new club, especially for me as I’d been at Crystal Palace for 12 years. It’s like starting a new school, you don’t know what to expect but you get used to it and this was something I would experience more than once.

In 2005 I moved from Leyton Orient to Northampton Town, where I won my first league promotion medal, as a runner up in League 2.

Shrewsbury was my next change in 2007, which was a bad period in my career for me, purely because I had two bad injuries that really limited my time on the pitch.

In 2009 I signed for my current club Brentford. I played with the Brentford manager Andy Scott at Leyton Orient and he gave me an opportunity to move back to London and work under him. I’m loving my time here in Brentford, scoring 4 goals, temporarily captaining the side and most importantly, gaining my 2nd promotion medal for winning League 2.

Hunty celebrating after scoring for Brentford.

So this is me. I’ve played with and against many quality players, and at many big stadiums. If you want to know more stay tuned. I’m going to try and pass over the feeling of what it’s like to be a professional footballer. A view from my eyes, not just match days but also the other 6 days of the week, life at home, hobbies, past stories etc.

You can catch Hunty on his own blog “Life of Another League” or on Twitter.