WBA World Heavyweight champion David Haye travelled to Millwall this week to deliver a knock-out training session for his football heroes which he hopes will inspire the Lions˘€žË FA Cup giant-killing as they take on Birmingham City in the 3rd Round this Saturday.

A life long Millwall fan, Haye took Paul Robinson, Neil Harris, Steve Morison and Liam Trotter through their paces in a sparring session on the pitch at The Den before he took to the streets of South London to give local football fans a rare glimpse of one of the most coveted prizes in world football.

David Haye said: ”I grew up around here and Millwall is my local team so it˘ been great to come down to get the players prepared and get my hands on The FA Cup. All kids dream of playing at Wembley in a Cup Final and I˘€žËm no different as I love the big occasions and atmosphere. I˘€žËll be rooting for the boys this year and hope they get to the Final because I˘€žËd love to see them up against Man Utd and my mate Rio Ferdinand.” 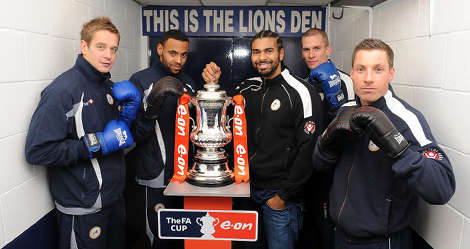 The weekend˘ FA Cup action culminates in the 4th Round draw on Sunday at 3.45pm from Wembley Stadiumwhich will be carried out by Ableseaman Leon Cashman, Rifleman David Etale and Senior Aircraftsman Neil Thomas in continuation of the FA’s partnership with Her Majesty’s Armed Forces.

In an FA Cup first, this season will see The FA recognise giant-killing results like never before with the launch of the Ronnie Radford Award.

Radford’s famous thunderbolt from 30 yards at Edgar Street saw Hereford humble the mighty Newcastle United in 1972 and The FA will recognise this season’s most impressive giant-killing by presenting the winning club with the Ronnie Radford Award at The FA Cup Final on May 14.

The 3rd Round FA Cup draw in full:

Written By
Kyle Elliot
More from Kyle Elliot
Footy-Boots has it's hands on a pair of Nike Elite Series boots!...
Read More