David Beckham may not be being joined by his family while in Italy but he has been united with his new customised football boots.

Becks, who’s been training with his new AC Milan team mates in Dubai whilst on loan from US outfit LA Galaxy, wore his new Predator Powersweve DB boots by Adidas complete with a few unique touches for his stay in Italy. 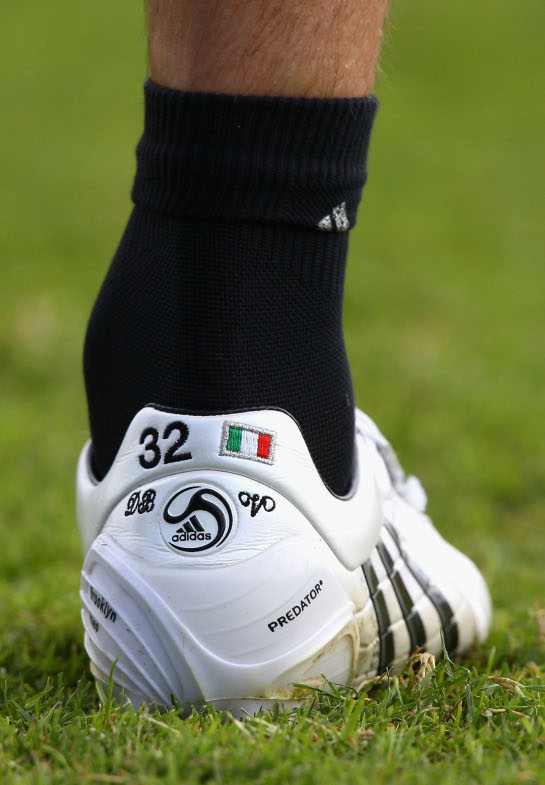 Above the heel of the left boot are both the English flag and Beckham’s AC Milan squad number ’32’ along with his initials and a ‘V’ for wife Victoria. On the heel of the right boot, the English flag is replaced with that of the Italian version. The club crest is incorporated on the lace cover of the right boot and his children’s names also feature.

Beckham could give his new boots an on pitch debut at the weekend as he’s been named in the squad for the Serie A match against AS Roma.

ClimaCool' Like the race cars that inspire them, ClimaCool '® footwear scavenges the slow moving air surrounding a shoe during exercise, and conducts it through aerodynamically optimized air channels to cool the foot.
adidas tested the movement of air around a runner’s shoe and positioned ventilation ducts in locations scientifically proven to maximize air velocity to the foot.

Along with ducts positioned on the sides and outsole of the football boot, every ClimaCool'® boot is built with a fully ventilated mesh upper and breathable sock liner to ensure maximum airflow penetrating the boot and cooling the foot from every side. The 360 degree ventilation system transports heat and sweat away from the foot and out of the boot as you exercise, providing a 40% increase in cooling over a conventional running shoe which, in testing, comes surprisingly close to wearing no boot at all.