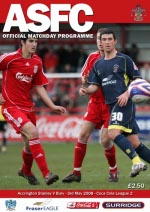 League Two side Accrington Stanley have called for the use of blades on football boots to be banned after two of their players suffered serious injury.

Earlier this week, Phil Edwards was stretchered off during Stanley’s game with Shrewsbury Town after his leg was badly gashed by an opponent wearing bladed boots. Edwards was unable to walk after the incident and his injury required 8 stitches.

It was the second injury that bladed football boots had caused the club. Goalkeeper Ian Dunbavin was ruled out for several weeks last month after he was gashed in the leg.

Phil has got an horrific gash behind his knee.

I’ve looked at the video and it was an accident but again it`s because of the blades.

Something needs to be done about them because we had this with Ian Dunbavin. They’re very dangerous.

Meanwhile, in more positive news, new research could be carried out in to the relatively recent spate of metatarsal injuries.

England know all about how damaging these can be with the likes of David Beckham and Wayne Rooney both injured in the run up to the last two World Cup’s.

As reported on Footy Boots previously, there are many theories as to why this type of injury has become so prevalent of late. These include the players punishing schedule, combative training, the use of artificial surfaces in training and of course football boot construction.

Now Iain Spears, reader of Biomechanics at the University of Teesside has decided to look in to the problem more closely.

They appear to be overuse injuries which occur more frequently towards the end of the season.

Many Premiership players wear new boots for every match. The manufacturers want to see their boots looking good and their logos as clear as possible on television.

We’ll look at the differences in the stiffness of the sole or of the material making up the outside of the boot. It may be that modern lightweight materials make players more vulnerable.

Another possibility is you can reduce pressure by changing the alignment of the studs.

Spears has teamed up with other researchers to create simulations of the impact on the foot of different types of boot and is applying for funding to ramp up his research.

Written By
Felipe
More from Felipe
£6,000 for a pair of football boots – that’s the starting price...
Read More