In one of the weirdest stories we’ve heard so far this year (and 2011 has been rife with sporting oddities) Ghana could be left without their kit for the 2012 Africa Cup of Nations, as their kit is held by customs officials due to unpaid charges. 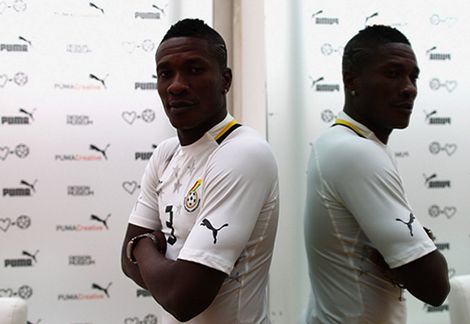 Gyan & Co. Might not be looking so sharp in January…

The Black Stars are left in potentially awkward position as their shipment of shirts, balls, football boots and training apparel for the Africa Cup of Nations remains stuck in customs limbo, due to an unpaid amount of customs fees.

World Cup Quarter-Finalists Ghana need the Ghana FA to stump up an alleged GH¢140,000 (£55,000 GBP) in unpaid customs fees for the authorities to release their shirts from holding.

According to Kwesi Nyantakyi, Ghana FA President, the GFA has written to the Ministry of Youth and Sports to intervene to enable them clear the goods, but after weeks of trying to get the kit released, they could now face the embarrassing prospect of finding alternative shirts.

“If we wait for a while and we get to the crunch, perhaps, we may have to go in for a loan somewhere to clear the goods,” Nyantakyi said on the matter.
Early suggestions from Newspapers in Ghana suggest that a contingency would be to have a local manufacturer produce the jerseys for the Africa Cup of Nations, though such a move would be a massive breach of contract with Puma.

Written By
Ramsay
More from Ramsay
Puma add a new silo to their range. A lightweight, leather shoe...
Read More