Over the next 6 weeks Nike are going to be using legendary stat-trackers Opta to see who is the best playmaker currently wearing their CTR360 II football boots.

As part of their ‘Take Control’ campaign for the new CTR360 II, Nike are pitting 5 (or 6 depending on your part of the World…) of their finest midfielders against each other to see who is the Premier League’s ultimate playmaker.

For the next six weeks, the six endorsees of Nike’s latest football boots will be tracked with live data from Opta, which will produce a CTR Score specially devised to asses what a playmaker does to take control of a game.

Beginning this week, Cesc Fabregas, Rafael Van der Vaart, Florent Malouda, James Milner, Jack Wilshere, (and if you’re on Nike’s American website; USMNT’s Stuart Holden will) be scored on their ability to master three disciplines:
Recieve the ball in the right place at the right time to really hurt the opposition.

Control the ball, bringing it under his spell without giving his maker a chance.

Distribute the perfect pass to complete the package.

A Final CTR score will come from a unique formula provided by Opta based on the following: 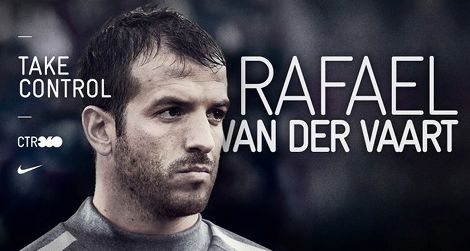 Currently on top of the Pile is Tottenham Hotspur’s Rafael van Der Vaart; The Dutch Maestro received 67 passes last night and provided the match-winning assist giving him a CTR Score of 374.

In second place was Arsenal’s Cesc Fabregas and the inspiration behind the CTR football boots. He logged 54 passes receive, 43 passes made and assisted Arshavin for the equaliser. His CTR Score was 247.

Who do you think will be the Overall CTR360 II-wearing champ? Sound off in the comments and back your favourite playmaker!

Written By
Kyle Elliot
More from Kyle Elliot
Wembley Stadium is ready to welcome it's newest super-fan to every even...
Read More