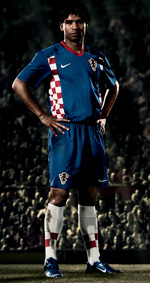 Eduardo is set to return to top flight action this evening, when Croatia face Romania.

Eduardo, the Brazilian born Croatian footballer has recovered from the horrific injury that resulted in a compound fracture on his left fibula and a dislocated ankle.

Out since the injury which occurred back in February 2008, Eduardo has featured for Arsenal reserves but not the first team, however he is likely to play a part this evening for Croatia.

Although he was born in Brazil, Eduardo took Croatian nationality back in 2002 and has played 22 times for the country scoring 13 goals.

Written By
Felipe
More from Felipe
Birmingham PLC have suspended their stock market shares following the arrests of...
Read More