Amidst the financial crisis seemingly descending upon the planet, the major holiday company XL entered administration on Friday morning.

Not only did this leave thousands of holiday makers stranded abroad as well ruin the travel plans of thousands more but it also saw West Ham United lose their sponsor.

XL have had their emblem adorned onto the claret and blue West Ham strip as their shirt sponsors however having gone bust, this deal has come to an abrupt end.

West Ham will now play with unbranded shirt until a new sponsor is found.

Indeed, the Premier League match at the weekend saw an encounter without any shirt sponsors at all when the Hammers took on West Brom who themselves still remain without any backing. 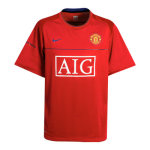 The sponsorship tie up between Man United and the insurance giants remains the largest ever deal, with the contract standing at a staggering £14 million a year.

After West Ham were left sponsorless due to XL’s administration problems, Man United are consulting the insurance company after they made an unprecedented approach to America’s Federal Reserve seeking £22 billion in short term financing.

The company was forced to request the cash in the wake of Lehman Brother’s bankruptcy and the takeover of Merrill Lynch. However United remain confident the company will be able to fulfill its commitment to the agreement.

Spanish side Valencia are also suffering from a sponsorship nightmare. The club has started legal proceedings against its new 08/09 shirt sponsor Valencia Experience, for failing to meet payment terms outlined in the contract signed by both parties last May.

Elsewhere there is potentially more optimistic news for Plymouth Argyle who are looking to tie up a major sponsorship deal in Japan.

The English football club has revealed that it is in talks with one of Japan’s largest advertising firms about ‘various sponsorship and advertising opportunities’.

The talks follow the arrival of Japanese businessman Yasuaki Kagami as a director in April and, two months later, the appointment of Japanese footballing legend Yasuhiko Okudera as president.

For further football shirt news, footballshirtculture.com is the website to visit.

Written By
Felipe
More from Felipe
Nike's viral advertising boys do it again with a stunning time-lapse video...
Read More