CR7 is arguably one of the greatest players to ever grace a football pitch.

Since being promoted to Sporting’s first team at the age of just 16 in 2002, Cristiano Ronaldo has consistently broken records, won trophies and scored a lot of goals (and we mean a lot). He even said himself, “I’ve already said that I don’t chase records, records chase me.”

Cristiano has been wearing Nike boots for most of his career, including the 1998 match where he wore their Nike Mercurials around his neck in a move that was bound to gain popularity for the boot. He has been in partnership with Nike since 2003 and in 2016, he signed a lifetime endorsement deal with them for $1 billion.

Over the years CR7 has had over two dozen signature football boots and always plays in the latest that Nike Mercurial has to offer. CR7’s current football boot is the Mercurial Superfly 8 Elite CR7 FG and judging by his Nike trajectory, his boots are only going to get better and better. 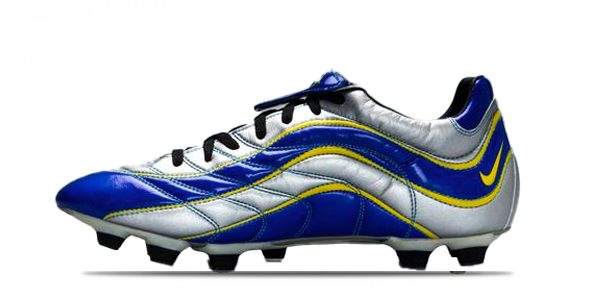 Cristiano unveils the innovative Nike Mercurial boot at a summit in Madrid. Photographers capture the iconic shot of him wearing the cleats around his neck. In fact, the boots are so famous and popular, they got a reboot back in 2017 that paid homage to the original colours and design.

To celebrate Cristiano signing on the dotted line with Nike, he was gifted a pair of the Mercurial Vapors. At the time of release in 2002, Cristiano was still playing for Lisbon’s first team and he’d already been wearing Nike’s shoes for years. 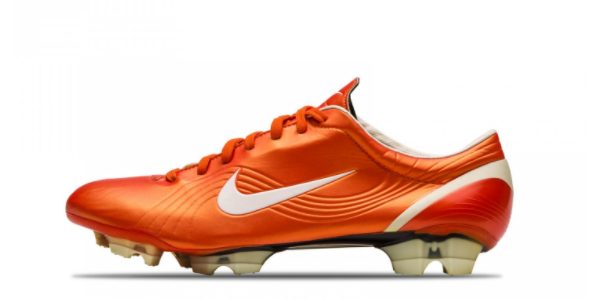 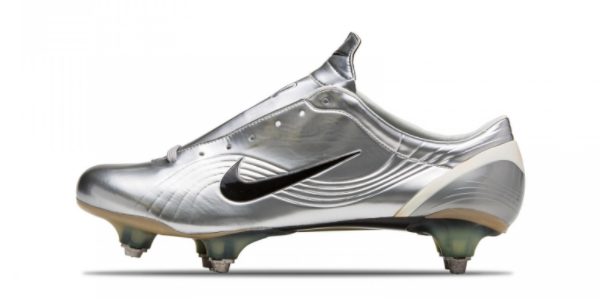 After impressing the legend that is Sir Alex Ferguson, in a friendly match against Manchester Utd, Cristiano kick started his career. He joined the Red Devils when he was 18 and well, the rest is history…

The gold Mercurial Vapor II echoed the shiny features of the first piece of silverware for CR7. His performance merited him with the winning header against Millwall in the FA Cup Final. 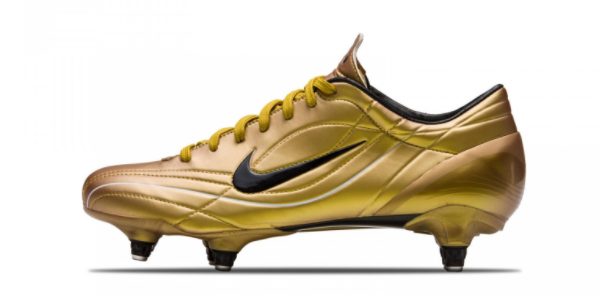 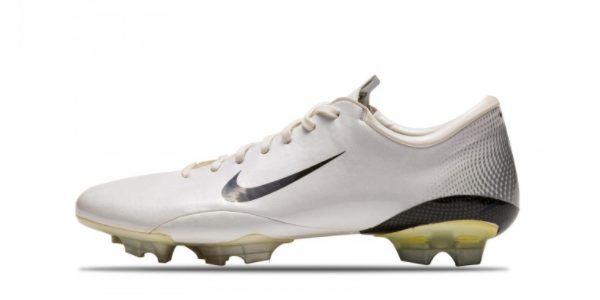 Everyone remembers the famous ‘Wink’ after getting Rooney sent off in the World Cup Finals. But the 06-07 season was a breakthrough year for Ronaldo, surpassing the 20 goal mark and lifting his first Premier League Title with Man Utd, wearing the Mercurial Vapor III.

The next season went all the way down to the wire, with Cristiano scoring the goal that secured his second Premier League title. His goal during a 2-0 win against Wigan was enough to take the title to the red side of Manchester. 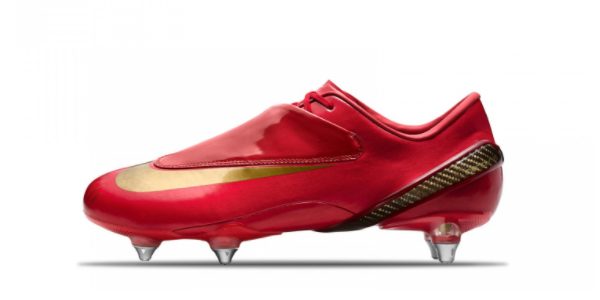 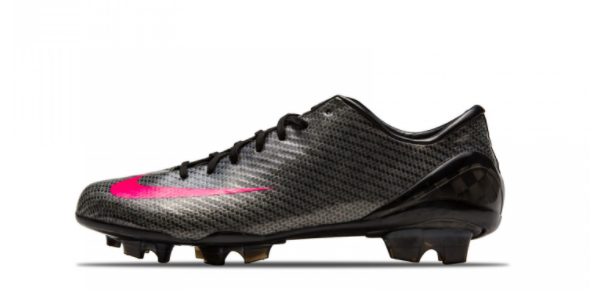 The medals didn’t stop there either! The Vapor Superfly debuted the season CR7 won his third Premier League title for the Red Devils, cementing him further as one of the most prolific and talented football players going. 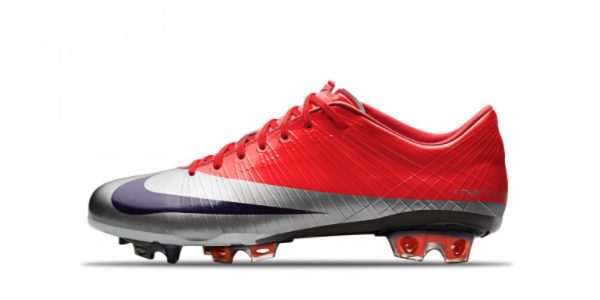 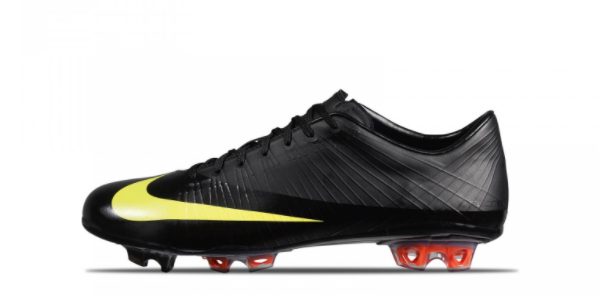 After a successful run of years at Man Utd, Cristiano decided it was time for a new challenge. It was a heated battle for clubs to obtain the Portuguese signature, but in the end, CR7 landed himself a bumper deal with La Liga Giants, Real Madrid.

The second release of this series, the Mercurial Vapor Superfly II, see’s Cristiano debuting them in his first 3-2 derby with for Madrid. 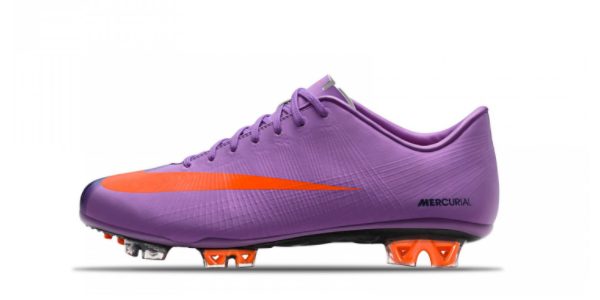 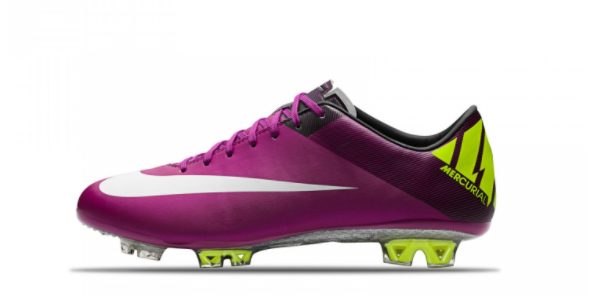 The 2011 drop of the Vapor III helped Ronaldo bag two important goals, home and away, during Madrid’s quarter final match up in the Champions League.

Arguably Ronaldo’s highest scoring boots to date. The CR7 Edition boots first debuted in the second El Clásico of the season and he scored over 60 goals in them! 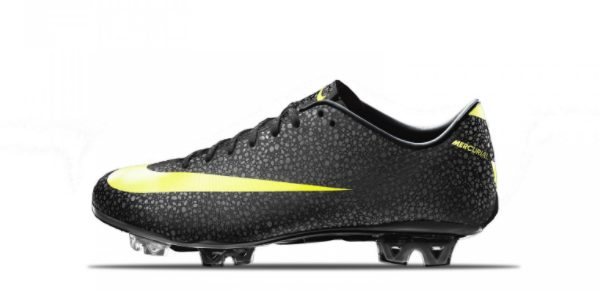 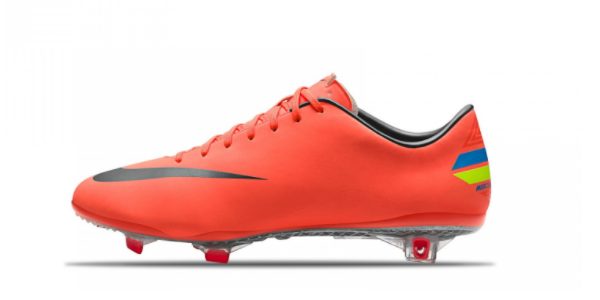 Another big scoring season for Ronaldo as he reaches the 40 goal tally for Madrid. His hattrick against fellow rival giants Barcelona in the El Clásico was the icing on the cake for this boot release.

He waited a longer time than his playing days at Man Utd, but Ronaldo finally clinched his first La Liga title with Madrid, sporting a white colourway version of the Vapor VIII. 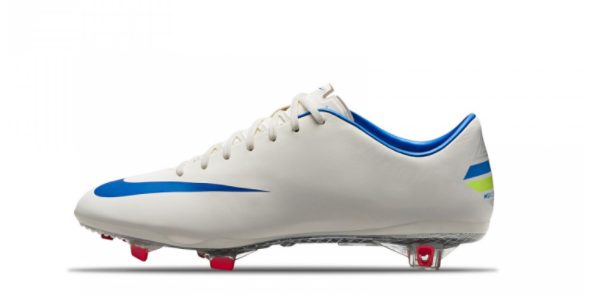 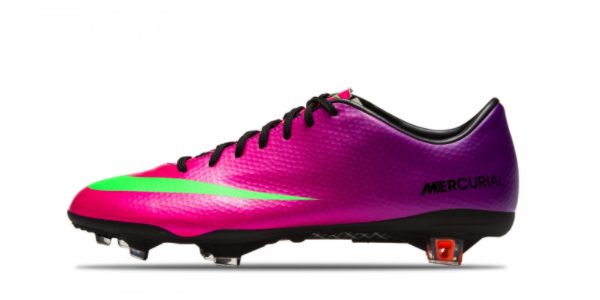 Nike release a special Mercurial Vapor IX commemorating Cristiano’s 2012 success, an innovative boot that starts the year with a bang.

A special release from Nike to pay homage to Ronaldo winning the 2013 Ballon d’Or award, averaging a goal a game and becoming the fastest player in Madrid’s history to score 200 goals. 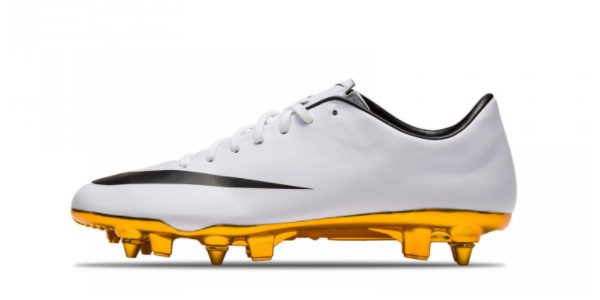 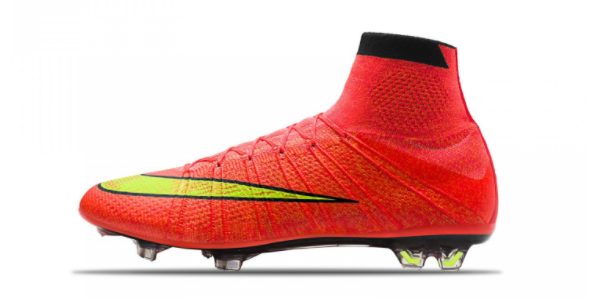 CR7 scores his 50th goal for Portugal. He also becomes the first Portuguese player to play and score in three FIFA World Cup tournaments, doing his club and his country a great service in the world of football.

Another year, another Ballon d’Or win for Ronaldo. Nike paid homage to this with a classy black and gold Superfly IV release. 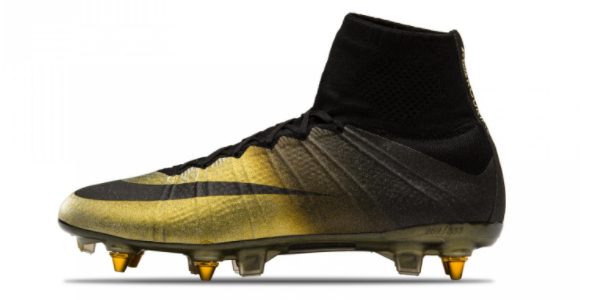 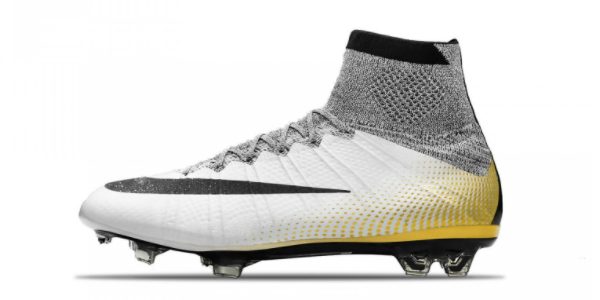 Yet another reason for Nike to release a signature boot for Ronaldo, with the player unsurprisingly becoming Madrid’s leading scorer of all time in Oct 2015, scoring his 324th goal in 311 games. 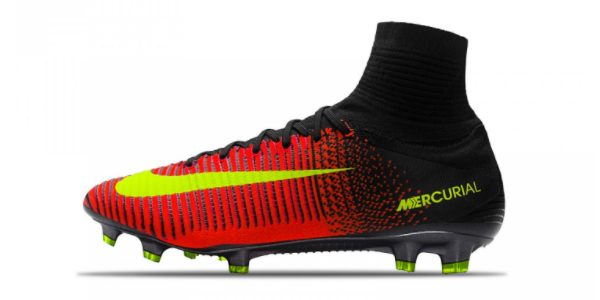 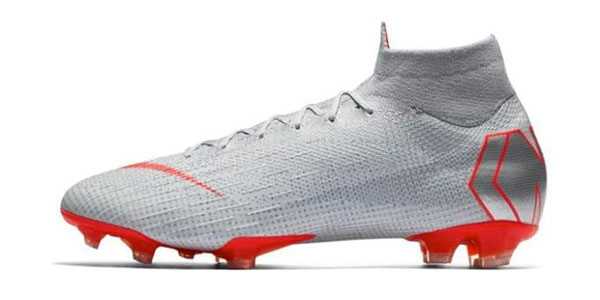 2018 saw another big money move for Cristiano, securing a spot with Italian side Juventus for a record fee of €100 million, the biggest transfer fee for an Italian football club to date.

This year brought more national success for Cristiano, with Portugal securing the first National League title, beating the Netherlands 1-0 in the final 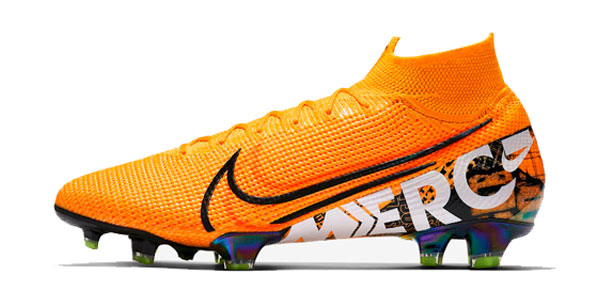 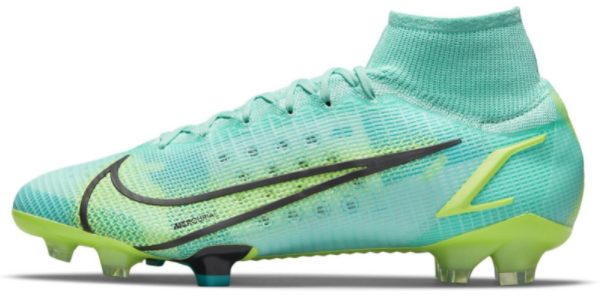 The 2020/2021 season was an unusual time for footballers and fans, with the Covid-19 restrictions meaning most of the season was played behind closed doors. Cristiano still managed to score 45 goals though, securing a 4th place finish with Juventus.

Alongside CR7’s many Nike boot releases, there’s been some special signature editions added in. We’ve added a bonus section below highlighting some of the best signature releases to date.

We begin at the first release of the Nike Mercurial Superfly II CR ‘Safari’ (super long name!). The black and white safari print with the orange swoosh kicked this off with a bang. The boots were debuted by Ronaldo as Real Madrid welcomed fierce rivals Atletico Madrid to Santiago Bernabeu on 7th November 2010. He went on to score a total of 16 goals in this stunning colourway. 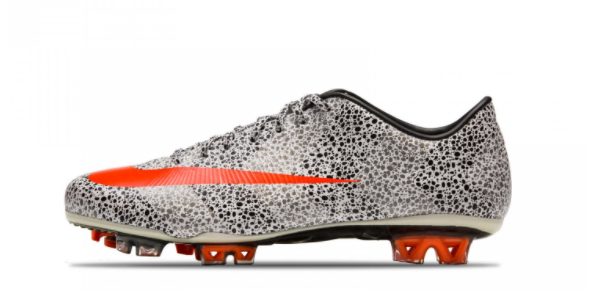 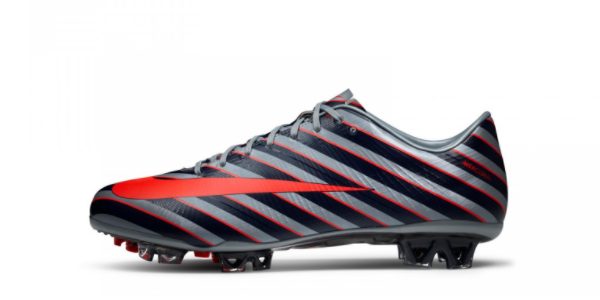 Another one of a kind boot release was Nikes striped version of the Superfly III. This design split into two sides. One side featured thin blue lines, whilst the opposite wore thicker blue and red lines, with the swoosh in orange across the front. First worn during the Madrid derby in Nov. 2011 in which Ronaldo scored two goals.

A year later, Nike released the Vapor VIII CR ‘Love to win – Hate to lose’ boots. The crazy, more out there designs were toned down, and the more sleek approach form Nike started to sneak in. The boots were predominately black, with a pop of blue/pink gradient heading down through to the soleplate. The more subtle approach seemed to have paid off too, with Crstiano Ronaldo scoring two goals in the season’s first El Clásico, making him the first and only player to score in six consecutive El Clásico games. 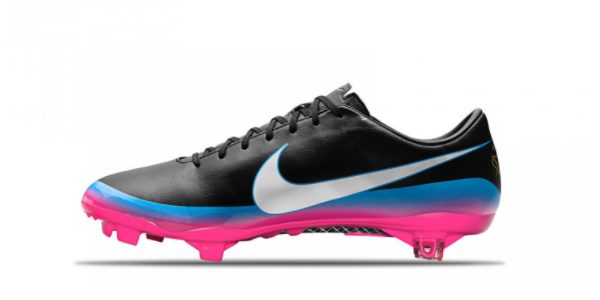 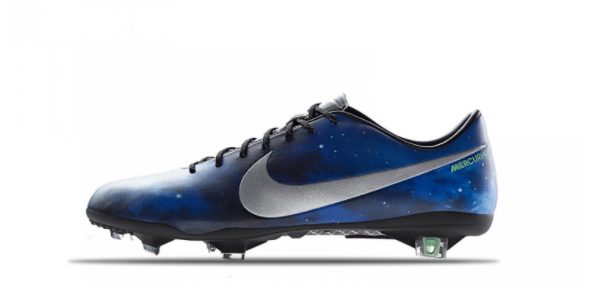 A release that’s out of this world! Sticking with the subtle, classy approach – Nike released the Vapor IX CR ‘Galaxy’. The subtle design packs a big punch when it comes to details. The closer you look, the more you see. CR7 debuts this signature boot against FC Barcelona. He goes on to make history by scoring his 100th away goal in his 106 away appearances for Madrid

Introducing the sleek, shiny Mercurial Superfly CR7 ‘Quinhentos’ which are as sophisticated as they sound (these boots were next level!). Nike designed them with a shiny metallic colourway, fading into a dark, fiery red at the heel. These boots marked Cristiano Ronaldo surpassing the 500 career goal mark. 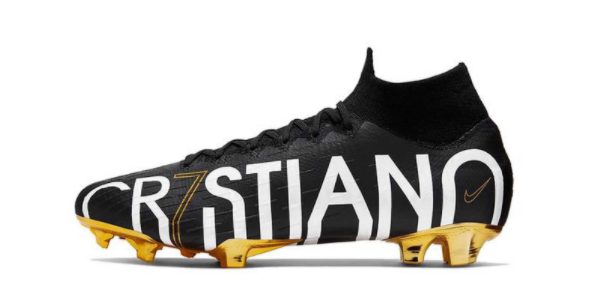 A personal favorite of mine because of the bold and striking approach. The all black colourway with ‘CR7STIANO’ wrapped around the base and the gold plated soleplate is just a thing of beauty! Nike released this stunner to pay homage to CR7’s first Sera A title win with Juventus – Not a bad present to receive from Nike!

The Nike Mercurial Dream Speed boots are part of a special Mercurial-only pack. Very similar to what Nike did to the Mercurial LVL UP, Nike teamed up exclusively with Sam Kerr, Cristiano Ronaldo, Erling Haaland, Kylian Mbappe and a handful of other players to produce the first dream speed series. After a successful launch, Nike then dropped the Dream Speed Series 2, representing the transition of colours representing the various frequencies of light (and their corresponding speed) to the numbers highlighted on the outlined Nike Swoosh (299,792,458 meters per second — or the speed of light).

Another successful line of football boots came in the form of Cristiano Ronaldo’s ‘ CR7 Chapter Series’. From 2015 through to 2018, Nike have released the CR7 series, constantly evolving the Mercurial superfly. Each chapter has a valuable and personal story attached to it from the incredible career of Cristiano Ronaldo. From tales from Cristiano’s dreams as a child, through to the highest achevements of his career. The Chapter series is the most personal boot release for Cristiano. Check out each chapter below: 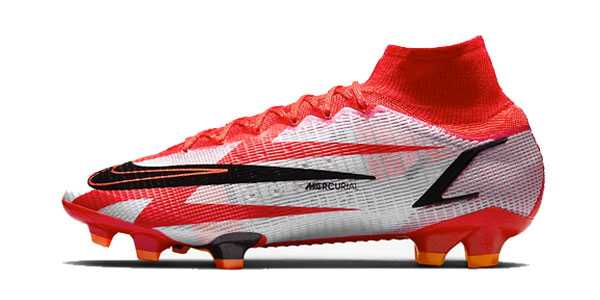 360-degree Flyknit construction wraps your foot for a sock-like fit.

All Conditions Control (ACC) technology with an ultra-thin NikeSkin overlay means you get reliable touch in wet and dry conditions.

For use on slightly wet, short-grass pitches

Cristiano’s current boots, the Nike Mercurial Superfly 8 Elite CR7 are a powerful boot that lends itself to the kind of agility and energy that has made Cristiano one of the greatest players in recent memory.

Not suitable for fields that are overly soaked

Not suitable for long grass fields

Written By
Michael D
More from Michael D
We take a sneak peek at a future release from Mizuno with...
Read More