But we’ve never seen the Board of Directors of one of the most-followed clubs in the World tell a player that their cleats are unacceptable. Until this weekend.

Former Inter Milan and Roma striker Adriano was told late last week by the board of directors at his new club, Corinthians, that his new football boots were not acceptable to wear whilst representing the club.

Adriano was set to join dozens of fellow Mercurial wearers, including Mesut Ozil, Cristiano Ronaldo and Theo Walcott, playing this weekend in the new Volt / Retro Superfly III until the order from the Cortinthians higher-ups came through.

The reason? The ‘Volt’ colourway that covers the majority of the new speed football boots too closely resembles that used on the kits of rivals Palmeiras FC.

Nike, keen to have all their players wearing the latest colourway, attempted to reason that the new Volt / Retro Superfly III bares no resemblance to that of Corinthians’ great rivals. 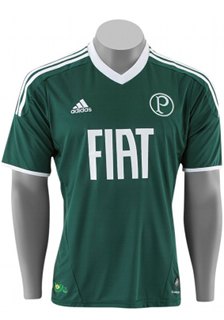 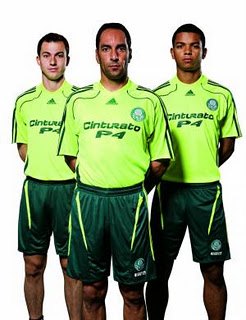 The Home and Third kits of rivals Palmeiras

But that did little to sway the board, who pointed out that it was neigh-identical to Palmeiras FC’s third kit, which is in adidas’ now-signature ‘electricity’ hue.

So, rather than the personalised Superfly III‘s ‘The Emperor’ has trained in all week, the former Selecao striker had to make do with the Granite/Red Superfly III this weekend against' Atletico Goianiense, that was approved by the board as being adequately ‘neutral’.

Whilst definitely one of the more bizarre football boots-stories we’ve had the pleasure of featuring for you here on Footy-Boots.com, the colour of rival clubs plays a part in boot selection more often than you may think.

Rafael van der Vaart, for example, told Footy-Boots.com in an interview earlier this year he had to request a pair of the new CTR360 II football boots in the ‘secondary’ Blue/White colourway from Nike.

The reason was, of course, his team-mates had heavily hinted that he wouldn’t be exactly endearing himself to the White Hart Lane faithful by wearing the ‘lead’ colour scheme of Red/White; the colours of massive rivals Arsenal.

What do you think to this slightly crazy story?

Are the board right to ask players to be mindful of the football boots they choose to wear?

Or should they have better things to be doing than keeping tabs on the cleats of every player in the squad?

Written By
Kyle Elliot
More from Kyle Elliot
See what Messi, Aguero & Co. will be wearing as they seek...
Read More