When it comes to promising young English footballers, it’s hard to name many more high-profile than Connor Wickham. 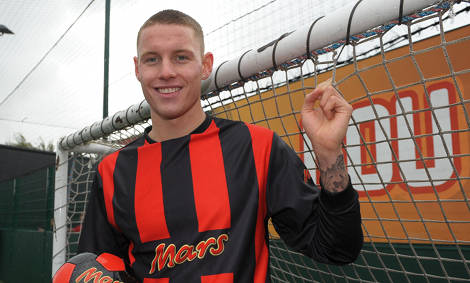 After lighting up the Championship with Ipswich, Wickham made an £8m move to Premier League side Sunderland – and whilst his time at the Black Cats has been hampered by injury – Wickham has still managed to break into the England U-21’s set-up and become one of Umbro’s leading men for the Umbro GT range of football boots.

As Mars & The FA open up their Just play centres for a week of free football (starting today, check the footnote for more details on how to get involved!), we caught up with 19 year old Wickham at a Just Play session in Sunderland.

Hi Connor, how’re you feeling after your taster session at a Just Play centre?

I’ve just finished a 10 minute session here, and I really enjoyed it! When Mars got in touch with me and asked if I wanted to be part of the Just Play scheme, I couldn’t say no.

It really shows the importance of grassroots football in the UK – and also shows how easy it is to get involved. There’s so many great sports facilities that people don’t know about, up and down the country and this programme is really going to help bring attention to them.

Just Play is all about getting people playing football as much as possible – where did you get your footballing fix as a youngster?

I remember playing football every day straight from school. Anywhere we could get chance, I’d just go out with my mates and play Headers & Volleys, World Cup Willy, just a knockabout – that sort of stuff.

That’s why Just Play has been such a great thing to be involved in – playing football doesn’t have to be a big effort, there’s plenty of places in the UK you can just go and enjoy playing football. 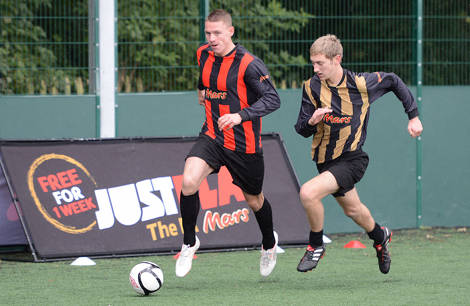 Which of your Sunderland team-mates love football so much, we’d probably find them playing at a Just Play centre?

It’s hard to pick just one out! All the boys here, they come in every day and do what they do! Everyone’s worked hard to get where they are, but there’s still that same love for the game, still that passion, and I think that’s vitally important for every footballer.

No matter what age you are, it’s all about wanting to play, winning games and everyone wanting to become a better footballer -' I just love playing, and it’s all I’ve ever wanted to do since I was younger!

With the likes of yourself, Ji Dong-Won and Fraizer Campbell, it’s fair to say you’ve got a fairly youthful strikeforce at Sunderland – what’s it like to have someone like Louis Saha around the team?

We do have a young set of players at Sunderland, but Louis has come in and he’s a bit more experienced. He’s had a great, great career and now he’s come to us – all I can do is learn from him!

I’ve spoke to him on the training ground and he has helped me improve my game and give me more to think about. But the challenge is always there, too and at the moment [Steven] Fletcher is the man scoring the goals!

It’s down to me now to learn from Fletch, Louis and everyone else in the team and try get some games. 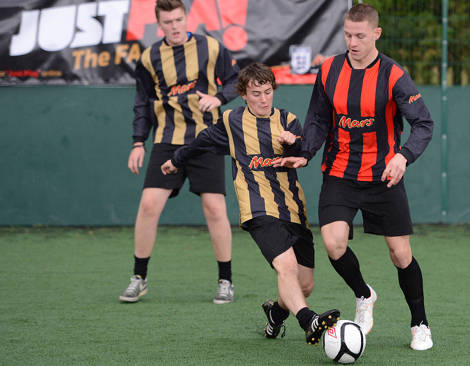 Speaking of goals, you scored a vital one for England U-21’s against Norway. With the play-offs coming up this month against Serbia, are the team nervy over the fact it all boils down to these two games?

No, I think all the boys know that we didn’t play to our potential against Norway, but dug in when we needed and it was great to get the goal that made us go through.

Obviously being top seed, Serbia’s not going to be an easy game, there’s a lot of good teams in the draw – but we have one of the best U-21’s teams in the world, when we have all out players fit and ready.

After that game you picked out Thomas Ince as a standout performer – what does a player so high on confidence bring to the team?

Obviously he was injured last season, but he’s done well at Blackpool and has scored a few goals for them and he’s flying.

Everyone knows what he’s about, give him the ball and he’ll run, shoot and cross it – take people on, too. It gives the team more confidence to get forward and get in the box, knowing that when you give him the ball he can make things happen.

If someone was looking to get back into football at a Just play centre, what would you tell them to look for in a pair of boots?

Look for something comfortable! Always make sure you’re looking for comfortable boots first, preferably strong ones, too – just boots that make you feel the best you can be when you play in them!

Do you have any customisation or tweaks on your football boots?

I’m lucky as I have boots that are moulded to the shape of my foot that Umbro have done for me. I’ve also got my initials and number on every pair that I have, but that’s about it. I’m just lucky to have them modified to my feet!

How’re you enjoying the Umbro GT range at the moment? They’re definitely not shy about going for some wild colours, are they?

Yeah, they’ve sent me some awful colours!! Aside from the colours – they’re the tools of my trade, and it’s important that they’re comfortable. But Umbro have been really good to me, in terms of gear they give me everything I could ask for and I’m fortunate that my boots fit me perfectly and I really like playing in them.

Mars and the FA are offering a week of free Just Play Sessions across the country from 8th Oct. Search online for Just Play to find your nearest centre.

Written By
Kyle Elliot
More from Kyle Elliot
All the speculation ends as the Manchester City captain announces he will...
Read More