Last week, we ran a story about the soon to be launched Concave football boot. Boy, did it cause a storm. We had comments coming out of our ears while industry message boards were full of little else in the days after we posted the story. 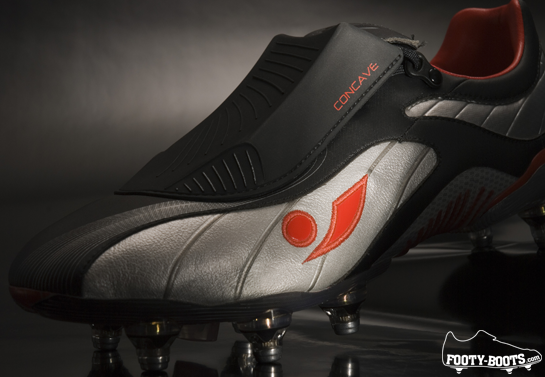 At the time, a lot of what was written was speculation and conjecture, based on just a couple of images that had found their way on to the Web.

But now, Concave has gone public and, as the saying goes, they are putting their money (and it looks like they’ve spent big on this) where their mouth is.

Looking at the blurb, it’s clear that Concave has concentrated on 3 particular aspects – power, accuracy and protection, three aspects which are pretty important to footballers.

Having been furnished with a pair of the Concave football boots at Footy Boots HQ, we were keen to take a first hand look at the technology advances that Concave boasts.

The Concave football boot’s most revolutionary feature is the convex shape of the upper, which of course matches that of a football and has been developed to ‘cup’ the ball on contact.

This component on the upper also increases the surface area of the sweet spot, which Concave state is up to four times bigger than usual.

The football boot upper, part leather, part synthetic, has an interesting lace system too. The laces are covered by the Concave component, but they only use two eyes. When we tried the football boots we were pleased to find that this construction was most effective and the football boot felt snug and secure on the foot.

Something we regularly comment on at Footy Boots is the football boot protection, or lack of it, to the metatarsal. Concave have considered this infamous injury in their design and the upper contains an aptly named ‘MetaGuard’. The ‘MetaGuard’ is a flexible layer of TPU (Thermoplastic Polyurethane) and reinforced cushioning foam composite. We couldn’t feel the ‘MetaGuard’ when the football boot was on, but its good to know its there.

7 screw in studs, with a configuration to even pressure across the sole and a single blade in the forefoot mid section.

On the sole, the boot is equipped with a balance stabiliser. In the middle of the sole, this stabiliser helps balance the front and rear of the foot, an area that again can cause metatarsal injury, the stabiliser prevents too much flexibility here.

We liked the look of the football boots, a stylish colourway, and we were very impressed with how the football boot looks to be made. As always we pulled and squeezed and bent the boot and there was no signs of weakness – again we’ll find out more on the quality when we test them with more exertion.

Concave are looking for ambassadors, presumably in the Premier League (and no, the Carlton Cole football boots you may have seen were just a mock up – he hasn’t signed with them to our knowledge), but to add some credibility to the project, they have contracted the former Scotland and Liverpool legend Kenny Dalglish.

We’ve lined up a Q&A with the Concave ‘techies’ and hope to tie up with Kenny Dalglish shortly to get a legend’s take on the football boots.

Loading... Tell us what you think of the new Concave Football Boots