Global warming or not, winter is here and when it comes to running around a football pitch, we’re about to stop sweating and start sneezing. This time of year is the peak time for sniffles.

With the Swine Flu scare and the ever-present threat of Man Flu, players of every level need to heed the drop in temperature and increase in precipitation if they’re going to get through 90 minutes without injury or drowning in snot.

Apart from your mum telling you the obvious “wrap up warm”, investing in a pair of football boots that can endure British pitch conditions while staying dry and light in rain or snow is essential.

You also need to prepare yourself both mentally and physically when it rains rather than shines.'  The Footy Boots holistic approach to winter is to focus on both the equipment and the body.

Pre-match exercise and post-match cool down are not something just for the readers of Men’s Health. Players with rippling pec’s, hamstrings and quads need as much of the above as those with four packs or five bellies – no matter your physique, muscle maintenance is a top priority to avoid strains and tears.

Without heat you’re not going to stretch properly. Leaving the locker room before warming up will rapidly lead to injury.

If you can’t take our word for it then listen to Kevin MacDonald and Chris Taylor, members of Under Armour’s European Test Team, who have been putting football kit through its paces in the robust conditions of Scotland. Midfielder McDonald plays for Kirkintilloch Rob Roy and says: “it was excellent getting boots which are waterproof as it rains almost every time we play: “It makes a real difference having boots which aren’t soaking before you even kick off.”

Defender Taylor plays for Ayrshire side Darvel and sums up his personal kit choice: “Waterproof kit is the way forward for Scottish football.”

Even hardmen football legends appreciate weatherproof tops.'  Former Hearts and Spurs star Dave Mackay said: “footballers should get the best stuff they can get their hands on, because it makes like that bit easier.”

Ignoring the conditions – as many Sunday Leaguers and Pros alike have done over the years – can have serious consequences such as hypothermia, even frostbite. You need to keep your feet dry and your body insulated.'  Mad as it sounds, dehydration in winter is a real problem as the body’s own warming process can lead to a significant drop in core body temperature and an inability to properly exercise the muscles before, during and after play.

Dehydration can be a painful regret. Be careful of a hot drink pre-kick off, even caffeine can be dehydrating, so you’re probably better off with a sports drink. As for night before or pre-match lager and Bacardi Breezers, probably best not to. 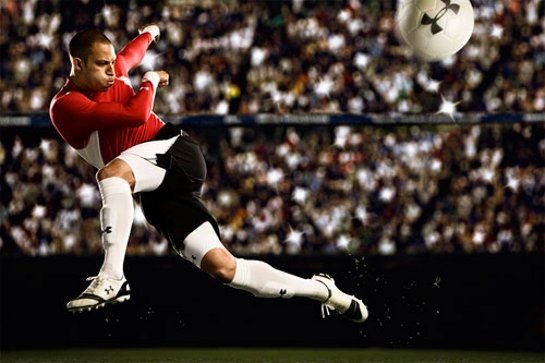 All the top sports brands offer professional kit for harsh conditions. The latest technology in winter bootwear aims to keep heat, friction, trapped moisture and all of those other elements that lead to blisters, discomfort, or just a light whiff of Wensleydale, away from your feet. On your torso, the materials used in Under Armour’s Cold Gear base layers are designed to heat your muscles while wicking moisture away from the skin, with a waffle weave microfiber construction – technical jargon that basically you means stay warm and dry.

The message is “layer up” boys.'  Wear thermal mid-layers to keep you warm without adding extra weight and invest in some outerwear to block the elements, such as Under Armour’s ArmourStorm gear. Even if you can’t afford top spec gear, layers on layers will help to trap in heat.

Even good old Vaseline is used by the pros to avoid the burn of freezing winds on any uncovered area, although the head and neck should also be covered if you start to shiver. Fifty per cent of the total heat lost by your body goes out through your head.

It’s not just the physical side of your performance that is affected by cold. Even mild hypothermia affects the brain making it difficult to think or move quickly. As a team you need to be alert for the signs of colour change in the skin, drowsiness and numbness in those around you. Oh, and irrational swearing is also a symptom of hypothermia so if your normally mild-mannered keeper suddenly sounds like he has Tourette’s, you might want to point him towards a duvet or the nice St John’s Ambulance people.

It’s always tough playing through winter, but for the passionate among us we’re never going to stop. So, invest in what you can afford, keep dry, protect your feet, and stay off the Bacardi Breezers.

For more information about UA Create and Dominate boots, or Cold Gear from Under Armour visit underarmour.com/ua11.

Written By
Felipe
More from Felipe
The FA have banned Javier Mascherano, the Liverpool midfielder, for a further...
Read More