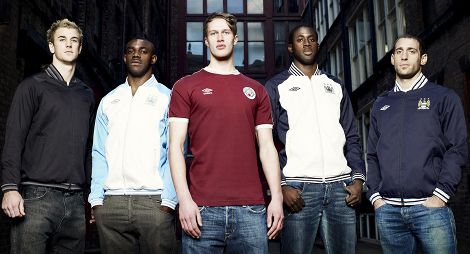 He˘ not a player but Jack Johnson – no not the happy-go-lucky Hawaiian troubadour -'  a true Blues fan from Burnage. Jack won a fans modelling competition to line-up with his heroes wearing the new Spring/Summer Umbro sportswear collection for Manchester City.

Inspired by the jacket worn by legendary Manchester City manager Joe Mercer, the new Raven Mercer (as worn by Joe Hart) is the latest incarnation of the smart, tailored walkout jackets that players have worn this season. This Raven colourway will be succeeded by 3 more as Manchester City head towards the end of their season – definitely an interesting and clever move by Umbro 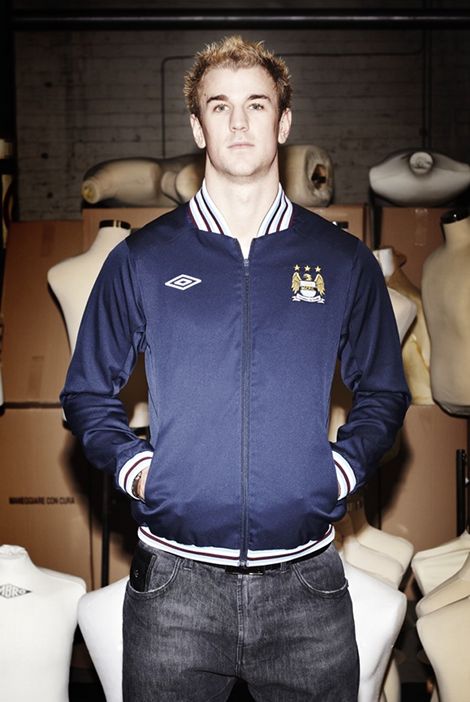 Manchester City and England goalkeeper Joe Hart comments: ”I really love this new gear, it˘ got a real classic look and we can˘€žËt wait to walk out in it.”

The spring collection also includes a Sportswear Classics range. Taking inspiration from the styling and look of retro training wear and using a colour palette inspired by the club˘ past, meaning you’ll be seeing a lot of Sky Blue, White, Maroon and Navy – there’s plenty to love about some of Umbro’s latest retro-inspired gear, even if you’re not a Eastlands regular.

Finally, inspired by the iconic taping that appeared on City football kits throughout the 1970s, the new Diamond Icons range combines retro design with the club˘ famous colours to form a truly stylish collection.

And revealed just in time for the Sky Blue’s trip to Wembley! Unless Nike have some comparable clobber in red and white, regardless of the result on the pitch, we’d have to guess that City’s fans would win the best-dress competition!

Thoughts on the new Umbro Manchester City range? Make sure you leave ’em in the comments below!