After clocking AC Milan Striker Zlatan Ibrahimovic in a new Blue Superfly II, we’ve been pretty keen to get try and be the first website to tell you about any new colourways that crop up in the wild!

So, when we came across this image of Chinese Goalkeeper Shichang Zhang, we wanted to get them up ASAP to share them with you!

Zhang is currently with the Chinese National Team and that’s where we saw him training in this very special adiZero.

It looks to us as though this colourway would be dubbed White/Cyan/Pink , as it shares all three colours with the Cyan/White/Pink adiZero that was released back in June. 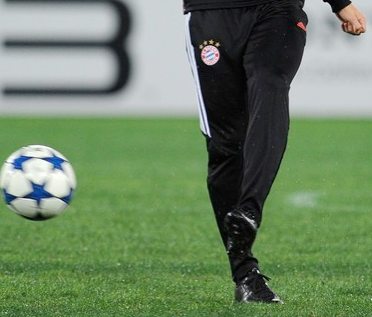 But it wasn’t the colourway that really caught our attention, instead it was the design!

The almost-horizontal stripe on the inside of the boot reminds us of the alleged adiZero Prime that we spotted Dimitar Rangelov in back in pre-season.

As the China national team is sponsored by adidas, there is a very good chance that Shichang Zhang has been able to get his hands on a prototype of these intriguing new football boots and wore them to train in. Though adidas must have denied him the permission to play in his new football boots as he opted for everyone’s new favourite – the Blackout/Warning adiZero during China’s match this weekend.

What do you think of this new design – we’ve heard lots of speculation about the adiZero Prime, a possible adiZero II, and some saying it’s simply a cynical redesign of the upper to entice more people to buy the same football boots with a new pattern?

Drop ’em in the comments and weigh into the debate!

Written By
Kyle Elliot
More from Kyle Elliot
We see what special footwear will be on show at Wembley this...
Read More