Chelsea and Samsung have extended their current sponsorship deal for a further three years which will see it run until the end of the 2012 / 2013 season.

Samsung have been the official sponsors to the London club since 2005 and the tie up has won numerous honours including ‘Best Sponsorship of a Sport Team’ in 2007 and ‘Best Integrated Sport Marketing Campaign’ in 2008 at the prestigious Sports Industry Awards. 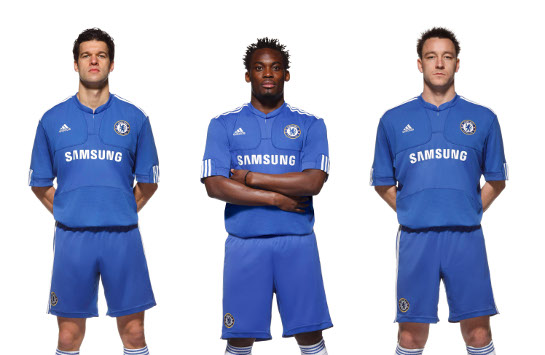 The Chelsea shirt will continue to bear the Samsung logo and the giant electronics firm will retain it’s exclusivity in all consumer electronic products including digital cameras, mobile phones and IT equipment.

Our relationship is far more meaningful than a conventional sports sponsorship arrangement. While this renewal represents excellent value for Chelsea it is more than that – it is a true partnership between two organisations who are both highly successful on the global stage and whose strengths and ambitions complement each other perfectly.

The renewal of our partnership is a significant step forward on the original deal, and we are pleased to deliver additional rights for Samsung to use in key areas of their business. We very much welcome the continued partnership and anticipate mutual success from the deepening and broadening of our relationship.

More generally it reaffirms Chelsea’s position in the business and sponsorship market as one of the market leaders in football and demonstrates that investment at this time is key to growth.

Written By
Felipe
More from Felipe
It's been another quiet week then! Diving, stamping, poorly judged goal celebrations...
Read More