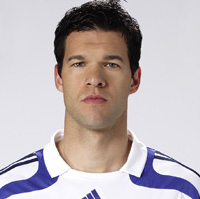 Chelsea came out of the blocks flying. Within a minute and a half they had taken two shots on target, and looked pumped up for the game.

Vidic who had just returned to the team after a stomach bug, took a nasty knee in the face early on, with a tooth going through his lip and had to be replaced by Owen Hargreaves, with Wes Brown tucking in to the centre half spot.

20 minutes in and Chelsea hit the woodwork, courtesy of a Joe Cole strike. Cole made a run into the box, his indecision allowed the United defence to try and clear, the ball bounced fortuitously for Cole who struck first time, only to see the strike heat the upright.

Chelsea finally got the breakthrough they deserved. On 45 minutes Drogba held the ball up well just outside the left side of the penalty box. He stood a cross up to the far post and Ballack, unchallenged, headed the ball across Van der Sar into the net.

Manchester United started the second half brightly, without the caution they seemed to have in the first half.

Ten minutes into the second half and United were level. Carvalho played a ball back towards Van der Sar without looking at Rooney who was hovering around the Chelsea back line. Rooney picked up Carvalho’s poor ball, went straight for goal, shot past Van der Sar and the ball finished tidily in the left hand corner.

Drogba had a good free kick saved by Van der Sar with 20 minutes to go. He and Ballack argued heatedly about who was going to take the kick, but Drogba must have shouted the louder. The shot towards the right hand corner was well saved by the big Dutchman.

With just 7 minutes to go, Chelsea won a penalty. Carrick guilty of handling as Essien crossed from the right. Ballack was appointed penalty taker and fired confidently to the right of Van der Sar.

United through everything at Chelsea in the dying minutes and caused Chelsea to save the ball off the line twice. But it wasn’t enough and Chelsea are now level on points with United at the top of the table.