With all eyes on Nani & Dani Alves in their adidas F50 adiZero‘s last night, we thought we’d round up the best of the other football boots from around Europe, in what we promise will be an almost adiZero-free edition! 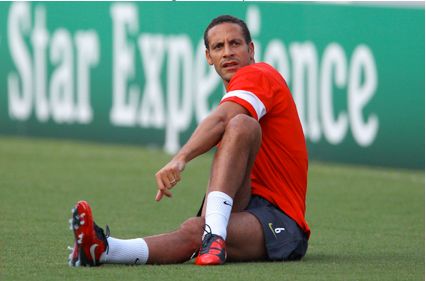 Big Rio is back in the heart of the Manchester United Defence, and we spotted him in training wearing these Custom Nike T90 Laser III‘s.

We reckon this Rio requested this soleplate to train on hard ground in, as during the match he was wearing the standard SG model.

We want to know – do you recognise the studs from anywhere else? Some of the Footy-Boots staff are saying they’re from the Tiempo Legend, whilst others think they could be from an older model of T90 Laser – drop us a comment and tell us what you think they are!

Eto’o has been on devastating form since returning from a disappointing World Cup with Cameroon.

Just in time for Puma, then – as the former-Barca ace bagged a hat-trick in the Puma v1.10SL Lightning last night against Werder Bremen. Now, if only Puma had a player in the SL’s like Eto’o in every league in Europe! 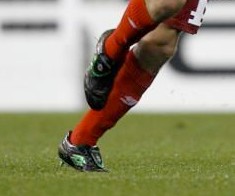 Dutch Defender Wisgerhof had his hands full at the back for FC Twente, as Spurs were on fine form in attack yesterday, despite being reduced to 10-men.

The ex-NEC Nijmegen (Who!?) stopper eschews the more modern football boots in Lotto’s range for some classic Stadio Fuoriclasse’s in Black/Green. 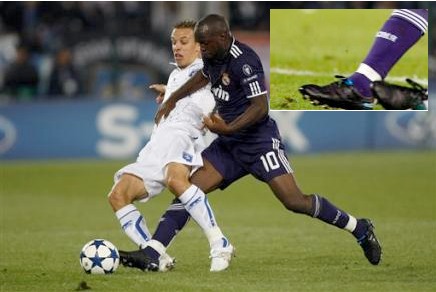 ‘Lass’ has must be nearing the end of his contract with adidas, as for the last two games Diarra has started to black-out his Predator_X‘s.

Taking a Sharpie to the signature adidas stripes on the instep and outside of the boot might make most people second-guess what he’s wearing, but we know that most of the Footy-Boots.com audience will spot the metal strip on the heel and cyan blue tongue that are dead giveaways!

Only two penalties were scored when Rubin Kazan hosted Barcelona, but one of the stand-out men on the night was 29 year old Vitali Kaleshin.

The Russian-born wide player prefers his Pearl/Black Mizuno Morelia‘s with their tongue chopped off.

Last time Kazan and Barcelona clashed, it was Karadeniz that bagged the winner at the Camp Nou – in that game he opted for the Mercurial Vapor V.

Rather than stick with his lucky football boots the Turkish international went old-school with a pair of Citron Mercurial Vapor SL‘s! Maybe he picked them up on eBay earlier in the season?

Portugese-born Cadu definitely picks up the award for the most unusual boots of the night. The Cluj centre-half seems to be wearing either the old-old Champions League colourway of the F50i with a fixed soleplate OR the F30i Firm-Ground!

We’d be interested to know whether he has a fixed-sole version to help with mid-foot stability – a lÄ‚Ë‡ Lionel Messi – or just prefers the F30i’s as a better overall football boot!

As promised, we couldn’t help but squeeze a spot for the most popular football boots in the world in here somewhere!

Chelsea young-gun Daniel Sturridge has long been an adidas Predator_X man, so we were surprised to see him become the latest Chelsea player to switch to the adidas F50 adiZero.

Sturridge has previously been clocked in the adidas Predator_X DB, so it’s perhaps no surprise that we see him here in the Messi Chameleon adiZero!

That’s all the boot-spotting we can muster for now, we’re going to warm up our boot-spotting eyes for the weekend’s action by reading 6 Where’s Wally? books back-to-back.

In the mean time, drop some knowledge on us with any boot-spots we missed in the comments section!

Written By
Kyle Elliot
More from Kyle Elliot
Puma puch the boundaries of design (and good taste) with the evoSPEED...
Read More