It promises to be a great game in Rome tonight as Manchester United take on Barcelona in the Champions League final.

And for the football boot enthusiast, it could be the pinnacle of the season with a host of new boots on show.

Much has been made of this boot of late with adidas coming out all guns blazing in a big-time marketing launch including posters, videos and of course, an on-pitch debut by the Argentine magician.

adidas will hope that the Barcelona player enjoys more freedom than he did against Chelsea in the semi final and that the biggest club stage of all provides an effective back drop to their most important launch for some time.

Not exactly new boots, but new to Carrick as he’s had them personalised for the big game.

The United player has had the words “UCL Final Rome 2009” stitched to the outside of each boot and “MC 16”, his initials and squad number, added to the tongue. 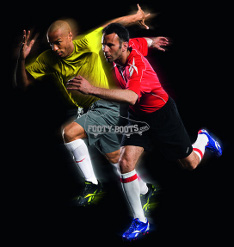 It’s been a soft launch from Reebok as they try and repeat their success of last year when Giggs turned out in a unique pair of KFS Sprintfit Pro II’s.

But they have come up with a nice video which you can see here.

(And if we’d have found a picture of these two training together, now that would have been a story!)

Not new boots of course, but after his performances against Porto and Arsenal in the quarter-final and semi-final respectively, far too important to leave out of the equation. Plus, we found this excellent image of him training last night.

Written By
Felipe
More from Felipe
Roy Keane is no longer manager of Sunderland.
Read More