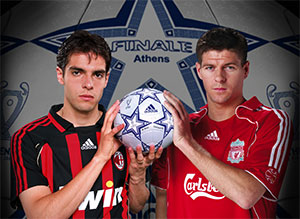 As kick-off approaches, Footy-Boots brings you the latest news on the European Champions League Final between Liverpool and AC Milan. The final will be watched across 200 countries by an estimated 3 billion people worldwide – a fantastic stage for the world to see the elite players and the football boots they wear.

The match ball will be provided by Adidas, and is a personalised edition of the Adidas Finale Athens ball. The teams, Liverpool and AC Milan have met only once before in the Champions League, the 2005 final which Milan were leading at half-time 3-0, only for Liverpool to score 3 times to level the score and win the match in the penalty shoot-out.

Milan have won the competition 6 times, with Liverpool only one behind with 5 wins. Milan will start the match with their players averaging 29.8 years in age, with Liverpool fielding a younger team, with an average of 26.3 years. But Milan features the competition’s leading goal-scorer, Kaka on 10 goals, who also head the most shots table at 27. Liverpool’s leading scorer is Peter Crouch on 6 goals, with Steven Gerrard heading the assists with 13.

Key moment: As always in recent finals, the penalty shoot-out looms large even before the start, and if it were to reach this stage, Liverpool keeper Reina could prove to be the hero in Athens.

Written By
Felipe
More from Felipe
More like the stand sweeper than the seasoned international, OhKay! brings a...
Read More