Castrol Performance data shows that the level of Cristiano Ronaldo™s performances have increased dramatically in his last few matches for Real Madrid.

Following a slow start to the season under Jos© Mourinho during which he netted just two goals in seven appearances in La Liga and the Champions League, the Portuguese™s form since the start of October has been electric, bagging 11 goals and providing three assists in his last five games in these competitions, an average of over two goal involvements per match.

The Mercurial Vapor Superfly II wearer saw a huge boost in his stats after tearing Racing Santander apart with 4 goals at the end of last month. Since the start of October, Ronaldo has seen his chance conversion rate rocket from a meagre 4.4% to an impressive 34.4%, and was vital against Milan in their October meeting at the Bernabeu, scoring his side™s first goal before setting up Ozil for the second. 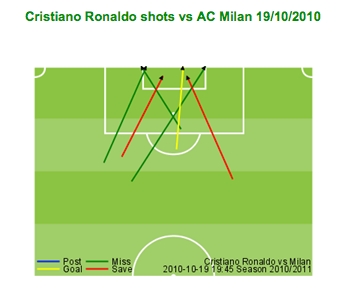 In this game he managed a match-high six shots, and if he is able to maintain his recent form then he could prove the match-winner once more on Wednesday.

Castrol Performance data shows that Nicolas Anelka is enjoying his most prolific Champions League campaign in 10 years since switching to the . Back in 2000/01, he netted five goals with boyhood club Paris SG. He was also the most dangerous threat against Spartak Moscow two weeks ago, scoring the second goal and unleashing four shots, the most on the night. 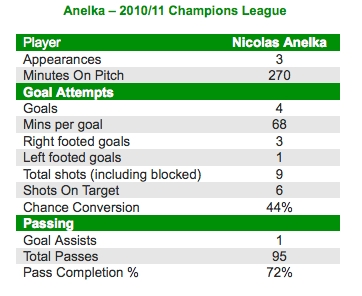 Anelka has scored in three consecutive Champions League games for the first time in his career. This season, only Samuel Eto™o has netted more goals (6) than the ex-Arsenal forward. 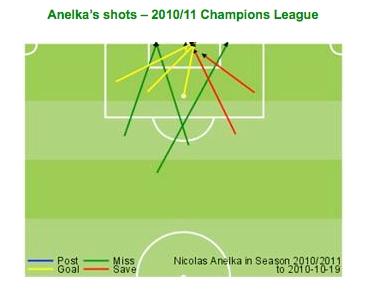 He has been involved in 63% of Chelsea™s goals, scoring four times and delivering one assist. In Moscow last month, he had four attempts, all from open play, testing keeper Andrey Dikan twice. If his prolific form continues at Stamford Bridge on Wednesday, Moscow could face a difficult night. Indeed, in his three games so far in the competition, nearly half of his shots have found the back of the net.

Castrol Performance data shows that Aiden McGeady (another adiZero convert) was the most accurate passer in the reverse fixture against Chelsea and no player created more chances on the night.

The ex-Celtic midfielder played his best Champions League game so far with the Moscow outfit when they faced the Blues two weeks ago. He completed 95% of passes, only misplacing two of the 40 he attempted.

Active on both flanks, as the touch graphic shows below, he also whipped in eight crosses and teed up four shots for Spartak. The two shots on target he has had so far in 263 minutes of action this season were achieved against Carlo Ancelotti™s men.

Profligate against Chelsea, a game in which they failed to convert any of their nine shots on target (whilst Chelsea put away two of their three shots on target), Valery Karpin will once again be looking to McGeady to create chances. 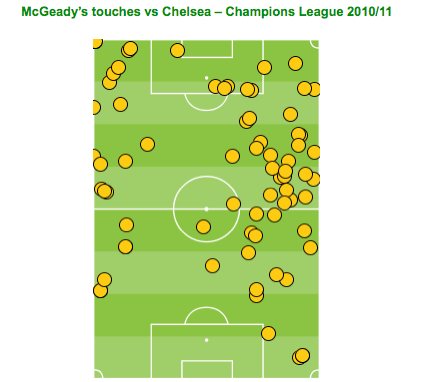 So there, you have it – there’s out 3 players who we think could make a real difference in tonight’s clashes – who else do you think could tip the game in their team’s favour?