In what will surely be England’s toughest qualification test under Fabio Capello, Castrol have unearthed some interesting stats ahead of Group G’s biggest crunch tie.

The search for a new long-term goalkeeper has plagued successive England managers since David Seaman hung up his gloves, but now, after a number of false starts and calamitous errors, Fabio Capello may have found his permanent number one.

Former Shrewsbury Town starlet Hart has started the domestic season superbly, ousting the experienced Shay Given from between the posts at Manchester City and conceding just one goal in three league games so far.

Indeed, he compares favourably to all the other available English ‹Ĺ›keepers in the top division in every category. England may finally have the long term solution to a long term goalkeeping problem.

Castrol Performance analysis shows that during the 2010 FIFA World Cup Qualifiers, Switzerland were the most potent side in the air, netting a competition-high 12 headed goals.

Those 12 headed goals equated to 67% of the Swiss side˘ total goal haul, another competition high.

Blaise N’Kufo netted four of those headed goals for the Swiss, but with the Congolese-born striker not in the squad this time around, it will be up to the likes of Alexander Frei and Marco Streller to carry the aerial threat to England.

In their disappointing Finals appearance in South Africa, the Swiss only managed to score once (not a header), but at home to England, the Alpine side will be confident of making the most of their aerial ability. 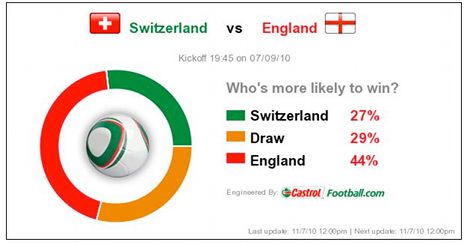 We think tonight’s match is going to be tricky for England, as the Swiss have proven they can beat anyone on their day with an impenetrable back four.

What do you think? Who’re the danger men for Switzerland, and who in the England ranks could unlock their mountainous defence?