Castrol Performance analysis shows that, despite missing out on South Africa, Theo Walcott has started the Premier League as England˘ most dangerous wideman, already netting four goals in just 187 minutes of action.

The Three Lions endured a disappointing time at the 2010 FIFA World Cup Finals, and could well have done with Walcott˘ lightning pace.

However, the Nike Mercurial Vapor Superfly II is sure to have played himself back into Fabio Capello˘ plans, having started the season superbly for the Gunners.

Indeed, he compares very favourably to the other widemen in the England squad for the game against Bulgaria, scoring more goals, mustering more shots, being more accurate with his crosses than all apart from Ashley Young and only behind James Milner in terms of successful dribbles. With a point to prove, Walcott may well give England the spark they need against Bulgaria.

According to Castrol Performance research, Bulgaria were at their most vulnerable defensively in the opening 15 minutes of their games in the FIFA World Cup qualifiers, conceding a joint-”high” four goals in this period.

Those four goals equated to 31% of their total goals conceded, another joint-”high” along with Iceland. While Fabio Capello˘ England side tended to be at their most potent later on in their games on the road to South Africa, they still managed to bag four goals in the first 15 minutes of their games, a total only three other sides could better.

Three of those four early goals came at home for the English, so Bulgaria˘ backline will need to be focused from the kick-off if they are to keep the Three Lions at bay from the start at Wembley. 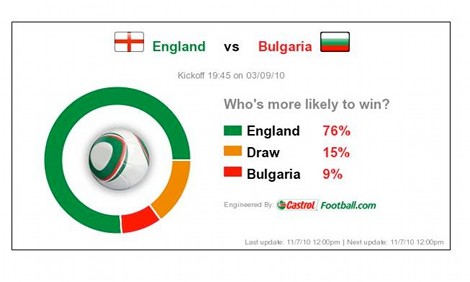 As for the player match-ups, our friends have broken down England and Bulgaria’s finest to see who’s performing in the best aspects of their position. 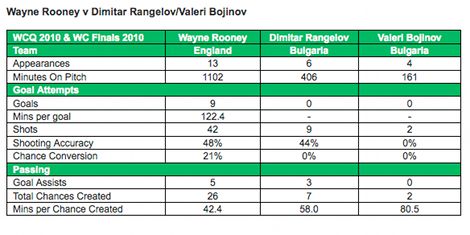 Wayne Rooney was exceptional form in the World Cup qualifiers – if he can recapture that passion tonight we can expect him to be massively more impressive than Bulgaria’s two first choice forwards.

Now Berbatov-less, Bulgaria are forced to look to Valeri Bojinov and Borussia Dortmund’s Dimitar Rangelov,'  who failed to find the net in any of Bulgaria’s doomed qualifying campaign matches. 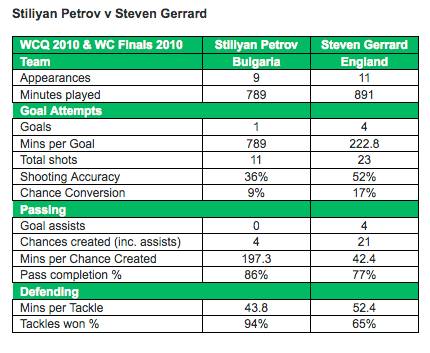 It’s a tale of two Premier League captains in the middle of the park as Aston Villa’s Petrov locks horns with Liverpool Steven Gerrard. With Gerrard likely to be playing ‘in the hole’ behind Rooney, it’s a given that the adidas Predator_X man will have more shots and goals.

Interestingly, though, while Petrov createsless chances directly, his high pass completion rate means that he’ll be keeping his team’s momentum ticking over from his central-midfield role. 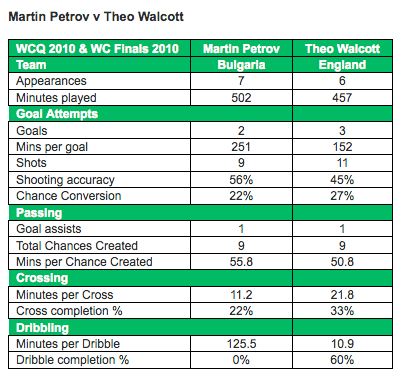 Despite having one less game under his belt, Walcott sneaks ahead of Martin Petrov – thanks almost entirely to that hat-trick against Croatia.

Bolton Wanderers new-boy Petrov does love to get in and around the box, and his higher accuracy makes him a threat doing so – however – his low cross completion percentage is something that needs to be worked on. 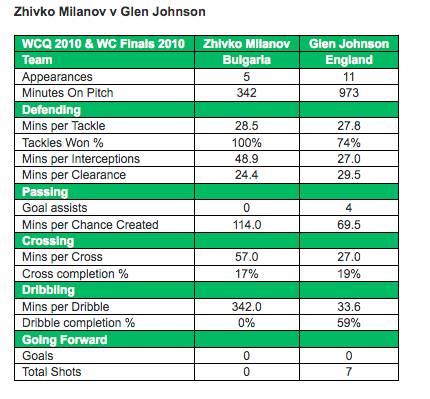 The final head to head is definitely the most interesting and really sums up why Glen Johnson is such a bone of contention among England fans – his high assists and frequent dribbles are handy to have on the team, but his really low rate of cross completion will probably surprise many fans.

Milanov on the other hand, wins every tackle he goes in for and doesn’t dribble the ball at all – preferring to pass or clear the ball away from danger.

What do you think? Will England have the advantage tonight, or will Bulgaria surprise everyone and strike at an England team low on confidence?