When it comes to stats – Castrol are right up there with Opta!

So, when they sent us over their Stat-Special for tomorrow’s Champions League Clash between Inter Milan and Barca, we had to share it with everyone!

In the Champions League this season, the Catalans have won 80% of their games at the Nou Camp, a figure which drops considerably when the Spanish giants have travelled away from home.

Indeed, Barca have won only one of their six Champions League games on the road, posting a very surprisingly poor 16.7% win rate. 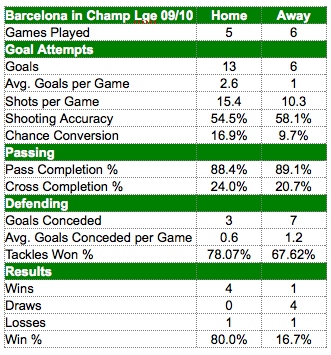 Internazionale are, for the most part, a typically well-disciplined Jose Mourinho side. While they may not be able to match Barcelona’s passing quality, they are more than capable of out-muscling their opponents.So far this season, Inter players have made a competition-high seven last man tackles. 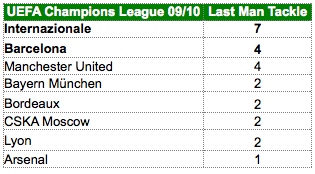 The Inter backline have also been working hard when it comes to clearing their lines. Indeed, of the eight quarter-finalists, only Lyon and CSKA Moscow have made more clearances so far this season.Barcelona, on the other hand, have made only 162 clearances, fewer than any other last eight side. The Milan giants have also made more blocks (see below) than any other side, with Barcelona again bottom of this ranking. 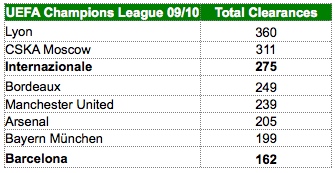 So there you have it – Barca are more likely to score, but Inter have one of the toughest defences.And with Eto’o and Zlatan not hitting true Champions League form just yet, this really could be time for the big players to step up!

Who do you think will win the game?

Written By
Felipe
More from Felipe
It's voting time again as this week we ask - Who is...
Read More