Everyone’s had a go at making their ‘Ultimate Player’, but few are able to go to the lengths that Castrol can to create one!

Using their famous Castrol Rankings statistics, the bods at Castrol have actually gone and built themselves the ‘Ultimate Performing Player’. 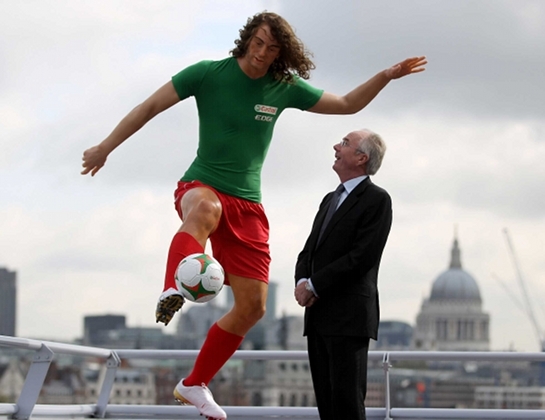 With the unmistakable hair of Carles Puyol, the eyes of Xavi, Lionel Messi's dynamic left foot and the accuracy of Thierry Henry's right, the explosive legs of Cristiano Ronaldo and the imposing height of Peter Crouch, the Ultimate Performing Player„may look a little odd, but can boast a transfer value of over £270million!

The model itself is made of carbon fibre and wax and took over six months to build by two former Madame Tussauds artists.

We’ve got to say – we’re impressed by the attention to detail shown by the artists, right down to the football boots! The big man has Messi’s adidas f50i on his left foot and Thierry Henry’s Reebok Valde II on his right!

The model will now go on a world-wide tour where he will meet football fans in South America, the Middle East, India and South Africa for the 2010 FIFA World Cup˘€žË.

In the mean time, check out the video above to see legends of the game Alan Shearer and Marcel Desailly talk about the Ultimate Performing Player, see what fans think and see how he was made!

Written By
footyboots
More from footyboots
https://www.youtube.com/watch?v=MLxXDSfYKWA On a tip off from some local sharp eyed boot fans...
Read More