With none of the Home Nations making it through to Euro 2008, it’s fair to assume that many football fans are going to have quite a lot of spare time on their hands this summer.

OK, it’ll be fine watching the artistry of Henry for France, the defensive know-how of Italy’s Cannavaro or the attacking flair of Portugal’s Ronaldo (though the latter will be harder without the added bonus of being able to scream at the TV ‘go on JT, ‘ave him’).

However, if you want to spice up your Euro 2008 viewing, and find a decent excuse to get out of the shopping during Switzerland v Czech Republic, then the Castrol Index could just be the thing.

As official sponsors of the tournament, Castrol have come up with a fascinating product which will allow all football fans to take on board a huge amount of up to the minute data and turn us all in to managers of the standing of Castrol endorsee Arsene Wenger. However, it’s not clear at this stage if that means not being able to see a game turning incident or bad tackle which happens 3 yards in front of you!

The Castrol Index, which you can find at www.castrolindex.com is up and running ahead of the summer and already is:

Providing in-depth stats e.g. how far and fast players have run (it breaks down how many metres in 5 minute intervals)

Ranks every player at the Euro 2008 on a number of criteria (updated by the minute) so you can see which players your team should be signing e.g. the highest ranked player who completes the most passes or makes the most tackles 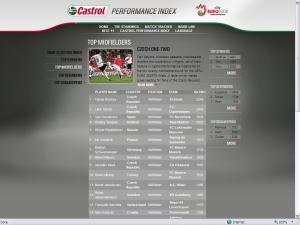 Real-time updates so player info is updated as it happens (a USP over ProZone or Opta). 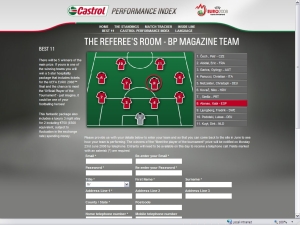 Other benefits of visiting the site, once you’ve read every thing on Footy Boots of course, is the chance to win tickets to the Euro 2008 final and meet the player of the tournament.

Written By
Felipe
More from Felipe
Avram Grant has his attention focused on the Premier League and Champions...
Read More