Thousands of pub football arguments will be settled during Euro 2008 (unless it’s stuff like “My Dad’s bigger than your Dad” or “You’ve just spilt my pint” thanks to new state of the art technology that you may have already caught a glimpse of on Footy Boots.

Whether it is Ronaldo v Torres or Ballack v Fabregas, debates all over the country can be laid to rest thanks to a new mathematical formula developed by Castrol.

The Castrol Performance Index uses a complex formula which evaluates all player actions during a match in terms of how they either assist or prevent a goal. It also weights its score by taking into account the strength of the opposition and the time in a game the player’s actions occurred.

Go to the Footy Boots Euro 2008 statistics area and you can see the CPI in action.

Statistics from the Castrol Index indicate that out of the 368 players in Austria and Switzerland, 40 currently ply their trade in the Premier League (11%). And below, you can check out the Castrol / Footy Boots Premier League Dream Team. 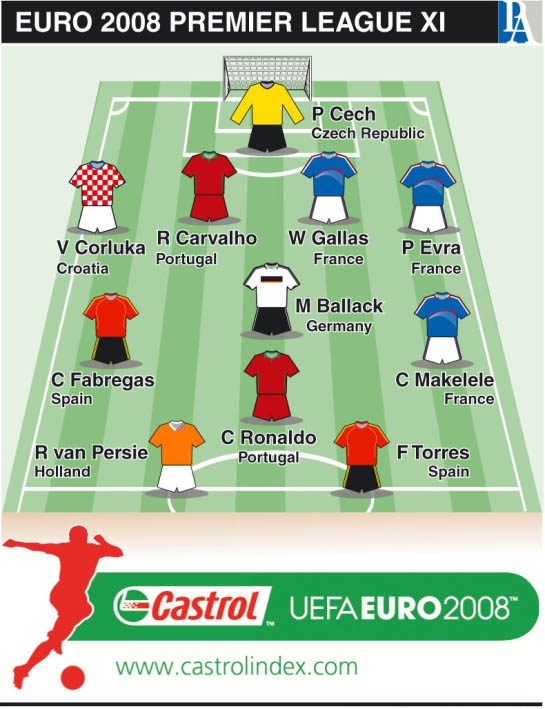 Castrol Brand Ambassador Arsene Wenger said: “The Castrol Performance Index allows me to be more measured in my assessment of players. It not only tells me if a guy has run 11.5km in a match, it examines how many short and long passes they have completed and better still, how many of those have been accurate and in what area of the pitch”.

“The Castrol Performance Index is exciting news for football fans because we believe it will really take them under the bonnet of football in a way they have not had access to before,” explained Rob Stroud, Marketing Manager at Castrol.

“Up until now, this level of football data and analysis has only really been available to those within the game. We believe the CPI will not only enhance fans understanding of the game, but also their enjoyment.”

“I use statistics in every game,” explains Wenger. “I’m a little bit addicted to data. Statistics are like a universal language for football managers and players alike because everybody can use them to make a point – statistics don’t usually lie when it comes to a player or a team’s performance.

“A football match is played by 22 players but you only have two eyes to observe everything so the data available has become critical. The Castrol Performance Index will be very useful for fans because they will no longer just be relying on the views of pundits and presenters. Instead, Castrol will be giving them access to clear graphics and statistics which they can use to judge players and teams’ performances objectively.”

Written By
Felipe
More from Felipe
Both the BBC and the Daily Mirror reported that Peter Crouch would...
Read More