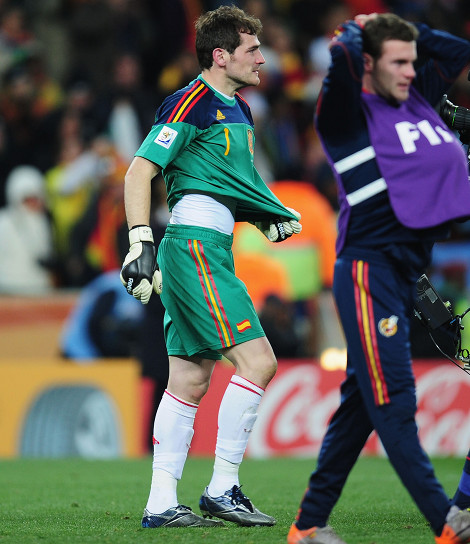 Spain’s recent win at Euro 2008 marked not only the end of a huge 44 year trophy-less drought – let’s hope that bodes well for certain other national sides – but established a special goalkeeping landmark: Madridista, Iker Casillas, became the first goalkeeper to captain a European Championship winning side. This elevates him to the ranks of a small elite of only 12 other legends of the game, including Franz Beckenbauer, Michel Platini, Ruud Gullit and, erm, Theodoros Zagorakis.

He’s already Spain’s second most capped goalkeeper, and closing in fast on Andoni Zubizarreta’s 126 cap landmark. Barring injury, a Massimo Taibi-like loss of form or a Carlos Roa-like loss of mind, Casillas looks like a good bet to become one of Spain’s most capped, and most successful, players ever.

Casillas pretty much has it all, topped off by a “white for life” contract signed with the self-pronounced “World’s Biggest Club” Real Madrid, that keeps him on the Spanish government, sorry, Madrid, payroll until 2017 – with an automatic contract extension if he’s still playing then.

The white and ‘honest blue’ Reebok Provecta Elite goalkeeper gloves to be precise, were worn by Casillas for Spain throughout this summer’s historic European Championship-winning tournament in Austria and Switzerland. They were particularly conspicuous in Casillas’ head-to-head with Italy’s Gianluigi Buffon in Spain’s penalty shoot out with Italy, in which, thanks to Casillas’ heroics, Spain emerged victorious. 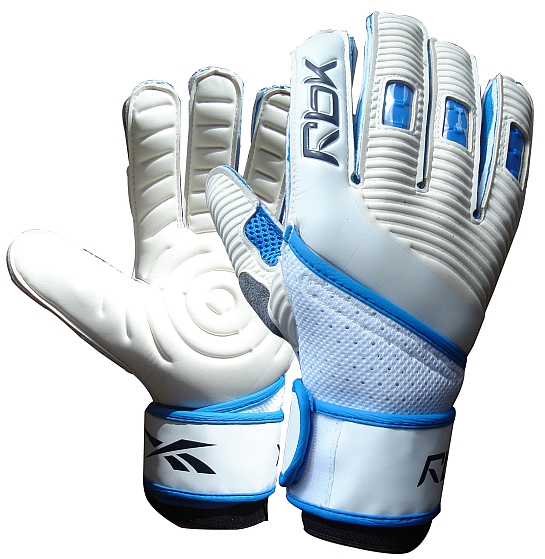 The most interesting and innovative feature of the gloves is perhaps the super long ‘wrap around’ wrist strap. In fact, the wrist strap on the official Casillas replica gloves available for sale in the shops and those worn by Casillas himself is different, with the strap on the official replica glove a far more experimental design. It is constructed from a long piece of fabric, stitched to the lower backhand of the glove and cutting diagonally across it, wrapping all the way round the wrist of the palm side of the glove, coming round the backhand again and fastening on the palm side. But Casillas himself has his gloves tailored, opting for a much simpler and traditional plain white wrist strap with his name on instead. So for all his history making and trend breaking – in some ways Casillas turns out to be a man of tradition after all! Rate it: