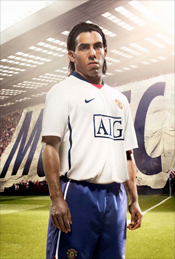 The Argentina striker is yet to officially sign a permanent deal with the Champions and hinted recently that he could move on in order to find regular first team football.

However, England midfielder Carrick is desperate for Tevez to stay because he considers him a vital part of the Manchester United squad. He also said that he is the type of young player the club must hold onto if they want to keep winning trophies in the coming seasons.

Carrick says that the whole squad ‘want him to stay’ because he is a ‘top player’ who has scored some ‘very important goals’ over the last couple of seasons. He may not have played as much as he would have hoped this season, but he has still cropped up with some goals when needed.

The former West Ham midfielder went on to say that Alex Ferguson has put together a ‘world-class squad’ of which Tevez is a crucial part of. That’s why Carrick is so keen for the striker to stay and fight for his place.

The final decision will be down to Ferguson though and Carrick admits that his manager is the best man to ensure that the team ‘keep progressing’. If that means letting Tevez move on, it will be within the best interests of the club.

It is clear to see why Tevez has grown frustrated though. He hasn’t been as involved this season as he was last. In fact, he has only scored three Premier League goals this campaign with Dimitar Berbatov often getting the nod over him.

Tevez has made it clear that he has grown frustrated by his lack of games and earlier this week said that he has ‘not played in important matches’ and as an ambitious player, he wants to make sure he is doing so.

Fellow players like Carrick are obviously keen for Tevez to stay, but in order for him to stay, the forward needs his manager to show that he wants him. The longer this takes to happen, the more likely Tevez is to leave in the summer.

Written By
Felipe
More from Felipe
It's the season of Festive cheer, though clearly not at Blackburn Rovers....
Read More